General Mills recently sent me some samples of Vanilla Chex to try out... and if you know me, you know I'm not one to say no to a giveaway.  When I received the two boxes of Vanilla Chex I decided to make one of the included recipes for a party I was going to that weekend.  I'm very glad I did that, as the Vanilla Chex muddy buddies were an enormous hit! 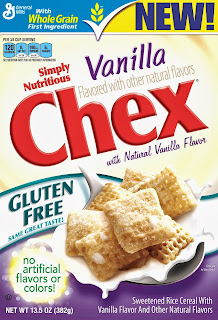 Before I get to the recipe, did you know that Chex offers tons of gluten free options?  There are now gluten free Rice Chex, Vanilla Chex, Chocolate Chex, Cinnamon Chex, Corn Chex, Apple Cinnamon Chex and Honey Nut Chex.  Pretty great, right?  I haven't had the opportunity to try the Apple Cinnamon flavor out yet, but I can confidently say that the other flavors are delightful.  I'm not generally a huge cereal person but when I do pick some up I'll include a box of Corn Chex in my selection.

Anyway, I used the recipe General Mills provided me to make some muddy buddies for the party.
Here's the recipe:
- - -


Carbohydrate Choices: 1
- - -
They are super easy to make and were a HUGE hit - I can't tell you the number of people who asked me for the recipe!  Chex also provide me with the below photo and I wish I had been thoughtful enough to prepare them like they are in the below photo.  Instead I just threw the muddy buddies in a big bowl and let people take as many as they want.  Oh well - there is always next time (and there will definitely be a next time!) 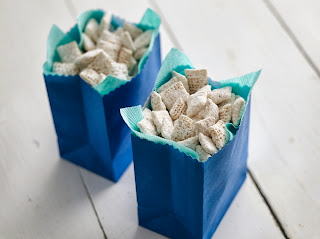 Fortunately I had enough left over to treat myself to a bowl of Vanilla Chex after and was so happy I had enough - I love this cereal!  The flavor is great and has a scant 8 grams of sugar - relatively low when you consider that flavored greek yogurt can back up to 24 grams of sugar in one serving!

Do you love it or do you love it?
- - -
Vanilla Chex
Product Locator
Posted by Stephen at 2:46 PM