My roommate Joe and his girlfriend Allie recommended Rubicon Deli to me months ago and I finally made it over there this past week.  I'm now kicking myself for it taking so long to make it that way, as Rubicon Deli is unbelievably awesome with great gluten free options.  Be warned, however, that the Deli is not a gluten free facility so if you are very sensitive to cross contamination I would advise that you steer clear or be very specific with the staff as to how your food is prepared.

When I went for my first visit to Rubicon I ordered the Umami burger.  The flavors rocked my world; the portobello mushrooms were delicious, the caramelized onions, which I'm not usually a fan of, were terrific and the gluten free focaccia bread was out-of-this-world good.  The bread isn't made in house, but that didn't bother me at all.  Rubicon Deli also has gluten free cookies to top off your sandwich. 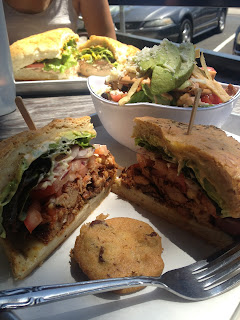 I went back to Rubicon Deli today and enjoyed a Po' Boy sandwich with a cowboy salad as a "Double Down" special.  While the sandwich and salad were both a great post-run lunch, I was annoyed when I arrived to the cash register that the "Double Down" isn't available for gluten free sandwiches.  My meal ended up cost $19, which is way more expensive than I was expecting at Rubicon Deli.  If they had warned me that the "double down" is unavailable for gluten free sandwiches, I wouldn't have doubled down.  Now I know for the future, but the cashier's general unfriendliness when I questioned the different pricing without notice turned me off a bit.  Regardless of his behavior I'll be going back and keeping in mind that the Double Down is not available for gluten free sandwiches.
- - -
Rubicon Deli
3715 India Street
San Diego, CA 92103 (Map)
858-488-3354
-
3819 Mission Boulevard
San Diego, CA 92109 (Map)
858-488-3354
Posted by Stephen at 6:11 PM