Last year I went to a great baseball game at New York's Citifield Stadium and really enjoyed it.  I didn't grow up being a sports fan but there is something about a summer evening at the ball park.  Of course it never hurts when the park has great gluten free options, even if the home team didn't win.  Check out my post on eating gluten free at Citifield here.

A few weeks ago I received an e-mail from Travelzoo informing me of cheap tickets to upcoming baseball games between the San Diego Padres and the Milwaukee Brewers.  Since my roommate Joe is from Milwaukee, I knew we had to make a night of it.  It didn't take much to persuade him to go, and ultimately we amassed a group that included his girlfriend Allie, his brother (who is not quite as diehard of a Brewers fan as Joe is), his brother's wife, and my friend Valerie.  We had a drink at the Blind Burro before heading into the park.  It was a little strange to be back in a city where the park is right in the center of the city; in New York that certainly isn't the case and I was very infrequently near Dodger Stadium in Los Angeles.  It hasn't been since I left Boston in 2008 that it has been so easy to get to a baseball stadium... perhaps I'll become a baseball aficionado while living here in SD.  San Diego even has a leg up on Boston, as the tickets were inexpensive and we had great seats right behind third base about ten rows in from the field.  With a Redbridge beer in hand I took my seat and sat down for an enjoyable night of baseball. 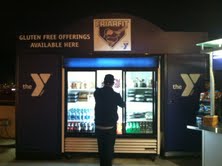 Anyway, Around halftime we got hungry so we decided to head to the dining options in the park.  Joe had an app on his iPhone which pointed him in the direction of the gluten free cart so we all headed over there as a group.  Valerie and I split off when the stand was proving difficult to find and asked for some help from a Park employee who pointed us in the right direction.  The gluten free stand is by the Mercado, which you walk through to get to the stand.

The above picture is a bit misleading, as the gluten free options weren't available in that refrigerator but instead at the grill that you can barely see in the right of the picture.  I'd hate to see anybody confused and take something from inside that refrigerator thinking it was gluten free as they were offering up sandwiches, paninis, and wraps which I can almost certainly say were not gluten free.  Petco Park should definitely make it clear that the items in the fridge are not safe for gluten free eaters.

The grill offered up typical baseball food: hot dogs and hamburgers, obviously served on gluten free buns.  While Joe had mentioned gluten free pretzels being available, none were in sight.

It was great to have gluten free options at Petco Park, particularly the Redbridge beer.  I spotted a Woodchuck Hard Cider in a refrigerator too and I believe those are all gluten free... best to check before imbibing, of course.  Hopefully Petco Park will clear up its signage so no gluten free eater makes the mistake of pulling something from the fridge.

And yes, I know there is no such thing as halftime in baseball.  That line above was a joke.