For MLK weekend my sister and I decided to meet in Austin, about halfway between our respective cities of San Diego and Philadelphia.  Neither of us had ever visited Austin so we made sure to create lists upon lists of what we should do, where we should eat, what we should drink, etc.

Salt Lick had been on our list since the beginning although we were both hesitant to visit.  My sister and I are not meat people but, seeing as neither of us had been to Texas, we thought barbecue was worth trying.  We visited the Salt Lick after two days in Austin and battling ourselves as to whether we wanted to visit the restaurant; ultimately we decided we had to visit the restaurant.  Before we went to Salt Lick we checked out Hamilton Pool Preserve, part of the Travis County Parks system.  Hamilton Pool Preserve was absolutely beautiful and I would definitely recommend it to anybody visiting Austin. 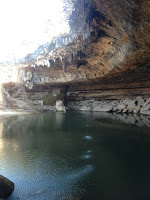 I can imagine Hamilton Pool would be an awesome place to visit in the summer as it is naturally cool and a nice natural setting.  From Hamilton Pool the drive to Salt Lick wound throughout the Texas countryside and gave us a nice view of just how big Texas is.  Before heading to Salt Lick, however, my sister and I hiked Reimers Park with beautiful views of the Pedernales River.  I definitely recommend Reimers Park if you're into hiking, especially because the "hike" near Hamilton Pool Preserve was very underwhelming.

Needless to say we had quite the appetite by the time we arrived at Salt Lick.  Upon opening the restaurant's door we were surrounded by the beautiful aromas of Texas BBQ and we were hooked.  We sat down to the menus and quickly peered them over; I knew almost instantaneously that I was going to stick with the sausage because when I do eat meat, I don't like eating it off the bone.  My sister and I decided to split a combo plate; she ordered the pork ribs while I asked for the sausage.  When I told the waiter about my allergy he was super helpful and told me that everything on the menu is gluten free save for the bread.  With that news my sister and I were primed to go and sat patiently waiting for our food.  It was served up quickly 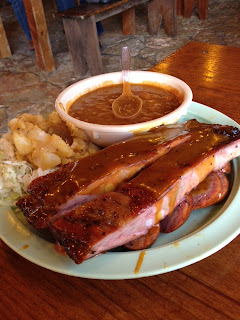 As you can see the portions were not small which went well with the flavors since they were also huge.  The sausage was great but what really made the meal was the sauce served with meats.  The sauce was so delicious that my sister and I even dipped the coleslaw in it!  The side of baked beans was delicious, the coleslaw had a nice zing to it, and the meat (even the pork) was great.

We would definitely go back to Salt Lick, even if only for the amazing BBQ sauce the restaurant serves up.  Next time I'm in Austin I'll definitely add this to my list and recommend it to anybody checking out the city and in search of good BBQ.