I spent this Thanksgiving 2012 in Philadelphia, one of my favorite cities; I love the history, how walkable it is, the museums, and the restaurant scene.  All in all, it is a great city to visit over a weekend with plenty to keep you busy.

Anyway amongst the five members of my family we decided to have dinner at Supper, a restaurant which some members of my family had previously visited.  My mother called ahead to let the restaurant know that we had a bit of a picky group with two vegetarians and one Celiac vegetarian in our party of six.  The restaurant assured my mother that there would be suitable options for me (the Celiac vegetarian... although a more accurate description is pescetarian and the two vegetarians.  During that initial phone call my mother was told to book in advance and that the price was estimated to be around $40 per person based on the prices for Thanksgiving 2011.

Following up on that initial call my mother called back soon and made our family's reservation for the night of Thanksgiving.  Once the reservation was made, my sister went in and visited and spoke with a female manager who told my sister that the vegetarian option would likely be a risotto.  She was assured that there would be a suitable option for the Celiac and vegetarians with the manager repeatedly assuring here that the option would likely be risotto.

When it came time to dinner we were seated and did not see a vegetarian option presented on the menu.  When I mentioned I was gluten free, I was told the butternut squash soup was fine but that the turkey dish would have to be served without the gravy as it contained flour.  When I told the waitress that I don't eat turkey, she was caught off guard and had to check with the kitchen to see what could be made for me.

When the waitress came back to our table it was with a disappointing answer:  tofu would be the vegetarian option.  And not with the gravy, as it contained flour; just plain tofu was the vegetarian option.  I was disappointed but didn't make a big stink of it as I still held out hope the tofu would be dressed up in some way.  Before the entrée was served, however, I had the opportunity to sample the restaurant's amazing butternut squash soup.  It was absolutely amazing with wonderful spices and a perfect flavor.  It was truly a great fall soup.

Much to my chagrin, the tofu was not dressed up in any kind of sauce.  Instead two slabs of smoked tofu were served alongside vegetables as the main entrée.  Tofu and vegetables for a vegetarian option? It was horrible, especially for a Thanksgiving dinner.  The real kicker: the meal came out to about $65/person.  Granted three people at our table had alcohol so the per person for the meal may have been less... so let's estimate $55/person.  The cost would not have been an issue if a suitable option had been presented for me, especially given that my mother had called twice and my sister once to ensure a good eating experience for the two vegetarians and I for a special meal.

For dessert: two scoops of passionfruit sorbet that tasted as if they had come straight out of a carton from Whole Foods.  If they were homemade, then they tasted like every other "homemade" sorbet that I have had.

I'm pretty easygoing about visiting restaurants but Supper really messed up my Thanksgiving.  I'm disappointed in the restaurant after my family contacted them three times over to ensure there would be good vegetarian and gluten free options for Thanksgiving dinner.  While the main menu may be more friendly to vegetarians and Celiacs, I will never visit Supper again because of the way the manager mislead us into thinking there would be options for the two vegetarians and I at our family's Thanksgiving meal.

After signing on the lease at my new place my future roomie suggested we check out a Mexican place around the corner from our apartment.  I'm always into Mexican food and not only because it is normally a simple meal to eat gluten free.

We arrived and soon order margaritas (me a pomegranate, Adam a regular) and some chips and guacamole.  The chips at Barrio Star are sprinkled with chili flakes which add a nice flavor.  The guacamole is freshly made and delicious.  The margaritas are strong and tasty; I've been to Barrio Star a few times since moving in and usually get the Pomegranate. 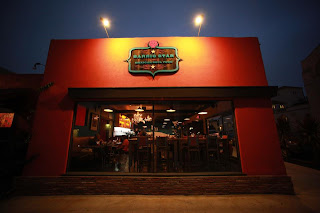 You can check out a dinner menu here.  That PDF doesn't mark the gluten free items but in the restauran the menu is marked with "gf" symbols.  Barrio Star is very gluten free friendly and has a lot of options for the discerning gluten free eater.

Posted by Stephen at 5:52 PM No comments:

It took me a bit of time, but I finally visited 2Good2Be and I'm definitely glad I did.  I'm not even going to create any buildup; instead, let me just say that this place is unbelievably amazing and is a must for anybody who eats gluten free and is visiting San Diego.  I know it's a bit outside of the city (about a 25 minute drive from downtown) but every millisecond of those 25 minutes will pay off with an unbelievable reward.

I was excited to walk in and see that 2Good2Be was a full cafe similar to a Starbucks.  So many gluten free places that I've visited are small and, while welcoming, aren't conducive to bringing a book and hanging out with your gluten free treat.  And what a treat it is. 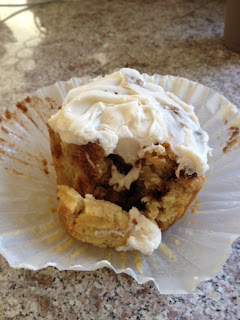 There it is in all its glory: the cinnabun.  This amazing confection oozed with amazing frosting and flavor.  I was told to warm it up a bit in the microwave and that advice created one of my favorite gluten free moments ever.  I can't gush about this place enough; you have to go see it yourself.

The day after I had the cinnabun I had a cupcake from 2Good2Be... because obviously I had brought one home as a next-day snack to try more than one item from the bakery.  It didn't disappoint, although heating it up in the microwave was not as effective as it had been for the cinnabun.  Next time I think I'll eat the cupcake fresh.

Regardless, I absolutely love 2Good2Be and am really excited to have found a terrific bakery in my new city.