After my brunch with friends at Newsroom my friend Tina suggested we make a visit to fōnuts to check out the bakery's delectable treats.  Never one to say no to a gluten free dessert, I obliged with the caveat that we had to ride with the top down on her new convertible.  What could be better than headed to a dessert shop with the top down driving through L.A.?  It was one of those fall days in L.A. when it had just rained, the sky was clear, and the views of the Hollywood Hills were spectacular.

fōnuts was a short trip over from Newsroom and on the way we caught up.  I hadn't been in L.A. since January so it was nice to be back and drive through my old 'hood of West Hollywood.  Anyway, we quickly arrived to fōnuts and were greeted by a very friendly staffer.  It turns out that she was an owner of the shop and told us that they have had gluten free options since the store's doors opened.

I picked up two donuts:  a pumpkin flavored one with icing and the banana chocolate.  The latter was chosen after being suggested by the owner as terrific and one of the original gluten free options.  I immediately took a bite out of the pumpkin spice flavor and loved it.  It had great flavor, wasn't over baked to the point of being too crispy. 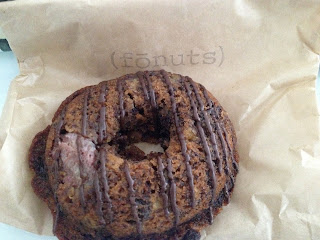 I waited until I arrived home to bite into the chocolate banana donut... and the wait was well worth it.  This donut was mind-bendingly awesome; there was actual bananas in it rather than just banana flavoring and the chocolate flavor complemented the banana flavor well.  I definitely have a new spot to visit whenever I'm in LA and can't wait to try more of fōnuts' treats.