A new location of 5 Napkin Burger recently opened up at 14th Street & 3rd Avenue right by my apartment.  While I've been meaning to try it for some time, it wasn't until last week that I finally went and checked out the restaurant's offerings.  I have passed by the restaurant's other Manhattan location in Hell's Kitchen plenty of times but don't often eat at burger places because I get too tempted by the french fries and despondent over their lack of gluten free hamburger buns. 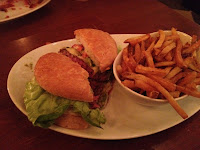 Before checking out the 14th Street location, representatives of 5 Napkin e-mailed me and let me know that the restaurant would be offering more gluten free options.  When I was in touch with the people at 5 Napkin they also mentioned the menu would soon feature lettuce wraps for the burgers, fish tacos on corn tortillas, french onion soup, buffalo chicken sandwich, and lobster sliders all served up gluten free.

I visited the restaurant with my friend Dan and made sure to bring a large appetite.  Upon being served the menu I let my waiter know that I eat gluten free; he said there wouldn't be a problem and that the fries were made in a gluten free fryer.  I'm a huge french fry fan and always sad when I can't have them so this news basically made my weekend.

I ultimately opted for the Avocado Ranch with a gluten free bun, without the ranch dressing.  This burger was awesome and the bun was equally delicious; it wasn't crunchy or crumbly like so many other gluten free buns but instead held its composure like what I remember gluten filled buns doing.

The fries being made in a gluten free fryer so I didn't have to worry about cross contamination.  I'll definitely visit 5 Napkin again, especially seeing as they have locations nationwide.

Funny recipe name, but I bet this one is so delicious and healthy.
I'm gonna love this.