I was home in upstate New York this past weekend and finally had the opportunity to check out Domino's gluten free pizza.  I was really excited when I first heard about the chain offering gluten free pizza back in early May because it meant that I would be able to order gluten free pizza in large swaths of the country.

However I was disappointed over the resulting furor over when it was revealed that the pizza crust was not recommended for people with Celiac Disease as it is not prepared in a gluten free environment.  It is up to you whether to try Domino's gluten free pizza or not; everybody is aware of his/her own sensitivity and as such it is each individual's decision.  I went ahead and tried it because, while I'm generally very sensitive, I decided that it was okay to try it one time. 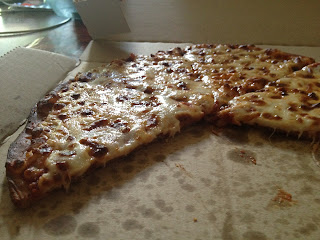 I have very fond memories of Domino's pizza from when I was a kid and it was consistently my Friday night order.  I ordered my first Domion's gluten free pizza plain because I wanted to get a better sense of the crust and not be overwhelmed by toppings.  The pizza arrived very quickly and is only available in a 10-inch size costing $14.  The pizza was piping hot when I opened up the box and I could barely wait to dig in... so I didn't!

The pizza was great and definitely reminded me of my childhood favorite, albeit with a much thinner crust.  However it wasn't thin to the point of being crunchy; it had great flavor to it and none of the gritty texture that is so often indicative of a gluten free crust.

I know that many Celiacs and gluten free people are wary of ordering the gluten free crust from Domino's and I understand that decision.  For me, it didn't present a problem as I felt no lingering side effects.  I'll definitely order Domino's gluten free pizza again.