Despite being exhausted after our day at Universal's Islands of Adventure (check out my post on gluten free eating at Universal here), Traivor and I decided that when in Orlando we should do it up... and that the only way to do that was to conquer Disney World the following day.  We let ourselves sleep in and have a leisurely breakfast before we set out on Round Two of our Orlando adventures.

My last time at Disney World was in 2008 with my family.  While I love theme parks, nobody else in my family was enthused about visiting the parks and I couldn't convince anybody to join me.  That meant that I was on my own in Disney World.  In some ways it was great; I didn't have to consult with somebody else's wishes and could use the single rider line often.  In other ways it wasn't great; I was alone in the Happiest Place on Earth! 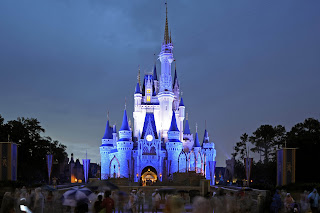 Luckily Traivor and I were on the same page.  He was excited to hear that at my last time at Disney World I hit all four parks - that's right, in one day I visited Epcot, Animal Kingdom, Magic Kingdom, and Hollywood Studios.  We decided to be ambitious and try for the same, especially after hearing that the Magic Kingdom park would be open 'til Midnight.  Crazy!

We started our day at Hollywood Studios, visiting Aerosmith's Rockin' Roller Coaster, the Tower of Terror, and Star Tours.  From there we made our way to Animal Kingdom, where we did the Everest Adventure rollercoaster and the Jungle Safari.

After Animal Kingdom we decided to head to Epcot, where we would try and do Soarin' and have lunch.  While we made it to lunch, Soarin' was a misfire: the wait was insane and the FastPass would have had us coming back to Epcot between 7 and 8pm!  Instead of Soarin' we did Captain EO, the cheesy Michael Jackson 3D show that was re-released after his death in 2009.  It was made in the 80s and that time period definitely shows, but all in all it was good fun especially after having read about it in the wake of his passing.  Since we were in Epcot we took a walk around the different countries, finally landing on Japan as we were both craving sushi.

When we chose Tokyo Dining we made sure to tell our hostess that I am gluten free.  The restaurant's manager promptly came over and addressed my dietary concerns.  I was really happy to have such an attentive staff and it definitely made me feel more comfortable eating there.  The restaurant also has gluten free soy sauce on tap, a nice addition that not every sushi place has.  Overall our meal was tasty and less expensive than Mythos in Islands of Adventure with nice views of the large body of water in the center of the countries section of Epcot.

After Epcot we headed over to our final stop of the day: Magic Kingdom.  I'll have more on what we did in Magic Kingdom in my next post.