This past week I had the pleasure of visiting my older brother Eric in the company of my younger brother Ian and my great friend from high school, Olivia. He has lived in Los Angeles for the past four years and I try to get out to see him as often as I can. We didn't have a strict itinerary for the trip, but my pre-trip GF-scouting (along with tips from Stephen) while "studying" provided me with a substantial handful of gastronomic destinations.

On Tuesday we did something that might be foreign to many Los Angelites - we used public transportation! We caught the metro out by Culver City and took it down to Union Station where we commenced a walking tour. By the time we got there over two hours and a few miles of walking had elapsed since breakfast, so we immediately set off on a hunt for a lunch venue. En route to a cafe recommended by our guide book we serendipitously stumbled upon Pitfire Pizza. Eric had heard really favorable reviews so we abandoned our other plan and went for pizza. I'm so glad we did. 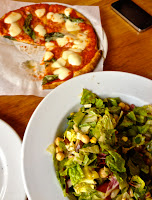 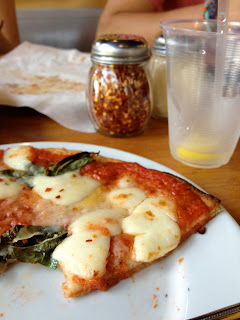 My friend Olivia and I split a GF margherita pizza and a chopped salad, both which were spectacular. I've never had a GF crust that tasty, chewy, and beautifully browned - if I hadn't had my brothers' glutinous pizza beside it for comparison, I might have doubted its lack of gluten. The toppings were not out shined by the crust - I'm a sucker for a tasty tomato sauce and it did not disappoint. The cheese and fresh basil rounded out the glorious preparation. The salad was a great accompaniment to the pizza and I was impressed by its garden-freshness and substantial size.

Having enjoyed our lunch so much, we weren't in any rush to leave. This promped my brothers to order a third pizza (they had already polished off two delectable if glutinous pizzas). Olivia and I split a soft-serve vanilla ice cream. It was no Abbott's, but certainly provided a great conclusion to a fabulous lunch.

After a few more iced teas, we finally resumed our walking tour, thoroughly satisfied. If I had a criticism, it would be Pitfire's limited geographic realm -- I can only hope (and vouch) for Upstate NY as a lucrative future market (I'm sure Stephen would agree?).