The same we had dinner at Posana (full recap on that here), we made the rather simple decision to venture to Posana for the next day's breakfast.  The breakfast would be our final meal in Asheville and after such a terrific and completely gluten free dinner, we didn't think it smart to skip out on an opportunity to sample the restaurant's dishes.

We arrived to Posana soon after it opened with eager stomachs.  After perusing the menu I immediately knew that I was going to order the french toast; I mean, how often is it that a Celiac can order french toast?  It was so amazing to have the entire menu at my disposal.  After living with Celiac for the past 6+ years, I am unaccustomed to such options; it seems like a million years ago when I could look at a menu and have my pick without concern.  Anyway, my sister went with the Quiche du Jour which was being made with peppers that day.  Both the french toast and the quiche were excellent!  The french toast wasn't soaked through as I remember it being in my pre-Celiac days.  Instead, it became especially delicious with the maple syrup served alongside it.

In addition to our meals, we took some food to go.  The previous night, we had been told that the restaurant made lots of pastries and that they encouraged people to take them on the road with them.  Obviously I had no qualms with that, so I purchased a to-go box for our long car ride. 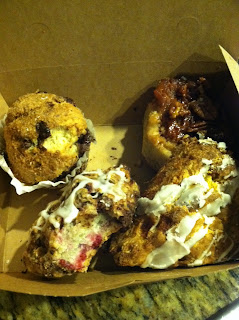 Posana will probably remain my best gluten free dining experience for some time.  If you live anywhere close, or are looking for a great gluten free destination, check out Posana and, more generally, Asheville.  I'll have more posts about Asheville's other gluten free options soon!