While perusing New York Magazine today, I saw a headline which said "Jennifer Esposito goes Gluten-Free at Goat Town."  I was perplexed because I had never heard of Goat Town as a gluten free friendly restaurant in New York and I had no idea Jennifer Esposito is gluten free!  Just another gluten free celebrity to join the ranks of Elisabeth, Zooey, and Gwyneth. 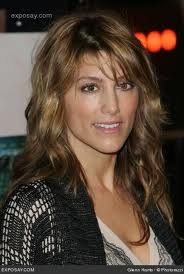 If you don't recognize the actress by her name, the photo above should help out.  If it doesn't, check out her IMDB profile here, which includes such hits as Crash and Summer of Sam.  If you still don't recognize her (or even if you do), and you're a NetFlix member, do yourself a favor and stream "Samantha Who?"  The show was underrated when it was on the air and sadly only lived for two seasons, but it's an enjoyable sitcom with the comedic talents of Ms. Esposito, Christina Applegate, and Melissa McCarthy, the last of whom is coming off an Emmy win for Mike & Molly (and a scene-stealing performance in Bridesmaids).

Anyway, the article follows Esposito as she traverses New York City while keeping a gluten free diet.  It also mentions a non-profit she is starting, called Jennifer's Way, meant to educate others about Celiac Disease.  The website advertises a launch date of October 10th, so I will be sure to update this post once the organization posts more information.

Do you love it or do you love it?
- - -
"Actress Jennifer Esposito Goes Gluten-Free at Goat Town, Bakes Lots of Scones for Dr. Oz"
By Alan Sytsma

I also liked Samanth Who. Now Esposito is on Blue Bloods, the show about a family of NYC police officers. Tom Selleck is also in it.