First, a question: what do you call the area north of The Grove on Beverly Boulevard?  Restaurant Row may be an apt name as the area features such restaurants as Jar, Cobras & Matadors, and the dessert shop Milk.  I've gone ahead and called it "Hollywood," as I normally see those blue City of Los Angeles neighborhood signs in the general area of east-of-West Hollywood-but-before-"Hollywood" (and by "Hollywood" I mean that area which all true Angelenos avoid as much as possible centered around Hollywood & Highland).  This entire first paragraph may make little to no sense for non-Angelenos, and for that I apologize.

That aside, my friend Hilary and I found ourselves starving last Tuesday night.  This wasn't any regular Tuesday, however, as Hilary and I had just stood in line for hours to see Britney Spears perform live on "Jimmy Kimmel Live."  Those hours of waiting were worth it -- she danced (read: walked around the stage), sang (read: lip-synched), and was generally looking great (read: better than on television, but no match for the old Britney).  On our way back from the JKL studio in Hollywood we decided to drive on Beverly Blvd. by the aforementioned Restaurant Row to see what we could find. 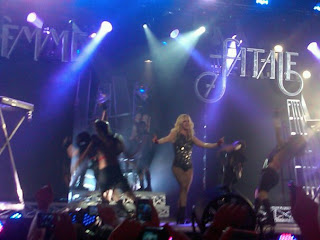 We saw the facade of Playa and thought it looked interesting, so Hilary made a quick U-Turn and I ran in to investigate.  After perusing the menu, I told Hilary that I thought it would be a good choice.  We were lucky to be seated just ten minutes before the kitchen closed.

After sitting down we were greeted by a waitress who asked us if it was our first time dining at Playa.  After telling her it was, she happily offered to help us with any food restrictions we had.  Hilary and I were obviously very happy to hear the waitress offer this without even have to mention my gluten intolerance or Hilary's distaste for red meat and seafood.  When I told her I could not eat gluten, the waitress said that I had "come to the right restaurant."

The vast majority of the dishes at Playa are totally gluten free friendly!  She mentioned a pork dish that I should stay away from and guided me towards the restaurant's arepas.  Regular readers know I love my arepas from previous posts and I was excited to try Playa's.  They did not disappoint.  While Caracas Arepas Bar's were fluffier, Playa's arepas were instead crispier and appeared to have been lightly grilled.  We ordered the arepas stuffed with shrimp and they were delightful.

Email ThisBlogThis!Share to TwitterShare to FacebookShare to Pinterest
Labels: Hollywood