Check it out -- my friend Lauren just sent me a link to a great LA Eater article featuring Hostaria del Piccolo, a new restaurant which just opened today in Santa Monica. 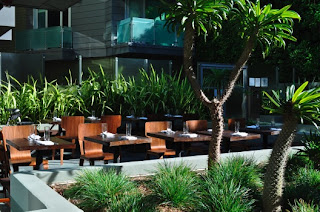 Eater prominently mentions that the restaurant will have a menu which conveniently labels gluten free, celiac friendly, vegan, and vegetarian options.  Check out the menu here.  The full Eater LA article can be found here.  The above photo is also courtesy of Eater LA.

Whoa -- just as I was about to post I received an UrbanDaddy blast which also advertises this place.  Check the UrbanDaddy writeup here.

Update:  I recently had the chance to check out Hostaria del Piccolo with my friend Lauren (a different Lauren, not the one who originally recommended HdP to me).  We were doing some shopping for REI down the street in "downtown" Santa Monica and decided to check it out.  I've been meaning to try it for quite some time but have never made it over there.  The restaurant is a very cool space; we sat at a table meant for four which had bench-like seating (so you share a bench with the person sitting at the table behind you).  Our waitress was very helpful and told me that any pizza can be made gluten free for an additional $3 surcharge.  At first she told me that I was only allowed to choose the option marked as "GF" on the menu, but after checking with the kitchen she changed her story -- just a heads up if you go to check it out, be persistent with your server!

Anyway, Lauren and I both ordered the margherita, although Lauren ordered her pie "full of gluten" (her words!). 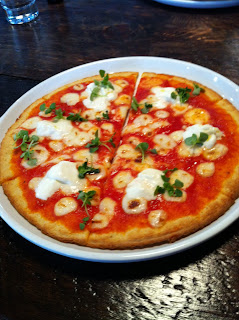 The pie was presented beautifully; it also tasted great!  The mozzarella had a very smooth texture and the added flavor of the basil made for a great pizza.  The crust is a thin crust; after we finished our meal I spoke with Christian the (owner? manager?) who was very curious to hear impressions of the gluten free crust.  He said that the restaurant had experimented with a thicker crust but that people told him they prefer the thinner crust.  I'd prefer a thicker crust -- it's been so long since I had a thick crust because it is often difficult to make such a crust gluten free.  Anyway, I really enjoyed my experience at Hostaria del Piccolo and was surprised by the personal attention we were given.

The one drawback: the price!  My meal came out to $21 for the pizza and no drinks.  That is a lot for lunch!  The life of a gluten free eater, I suppose.  I wish there were more places in L.A. that sold by-the-slice gluten free pizza.  I guess I'll have to get my fill from Mozzarelli's next time I'm in New York City.

this place looks fab. i want to try it.