Wow.  That's really the only way to begin this post.  I had been looking forward to visiting Mermaids Bakery for weeks and when I finally made it to Denver I was greeted by cupcakes from Mermaids that my parents had picked up earlier in the day. 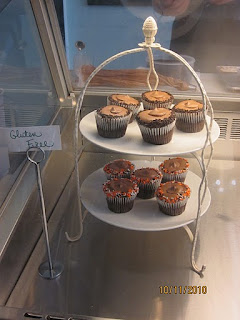 These cupcakes are outstanding.  If you're gluten free and have any opportunity to get to Denver, take it and visit Mermaids Bakery.  It's been more than 5 years since I had a cupcake with gluten; Mermaids' cupcakes imitated gluten-filled cupcakes to near perfection.  They were light and fluffy instead of heavy and dense as many gluten free cupcakes end up being.  I'm still astounded by how they are able to mimic gluten-filled recipes in their awesome cupcakes.  I had the Signature Red Velvet, Platinum Blond, and the Chocolate Dream -- all three were fantastic, my favorite being the Chocolate Dream. 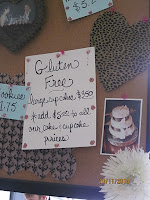 When my parents and I visited the bakery later on in our trip I was nervous to see the "Gluten Free" display initially empty.  The girl working behind the counter assured me that they had gluten free cupcakes available.  Indeed, they had just come out of the oven and had yet to be frosted.  As she went about frosting my cupcakes we talked about Mermaids and about the different options they offer gluten free folk.  The bakery has done wedding cakes, large orders of cupcakes, and can make specialty items gluten free as well.  For the full gluten free menu, click here.

Even better, the staff is super friendly and the prices aren't outrageous.  $3.50 for a fresh baked gluten free cupcake seems to be the market rate to me; I'm used to paying much more in Los Angeles and New York.

In addition to cupcakes the bakery offers up macaroons which are gluten free as well.   The macaroon was much larger than the ones I normally snack on and was delicious.  It, too, was freshly baked to perfection. 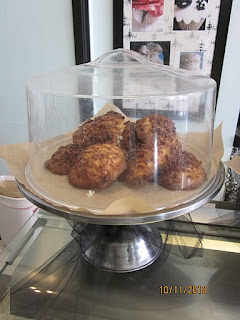 In a tantalizing bit of news, the girl working told me that the bakery is thinking about opening up an exclusively gluten free bakery.  This would be great news for Celiacs as we would no longer have to worry about cross-contamination.  Right now, the bakery is located less than a block from the 16th Street Mall.  It's a good location because of the pedestrian traffic on 16th Street and easily accessible via public transit.  However if you're visiting Denver for a short time, make a quick trip to Mermaids Bakery and avoid 16th Street.  My friend described it as a "tourist trap" and she was totally right.  There are much better places in Denver to spend your time.

In other news:  I love Denver!  I had a terrific weekend in Denver; I ate great food, met really nice people, reconnected with some college friends, and saw some beautiful vistas.  I was also very lucky to see my friends Stephany and Robyn, who now live in Denver.  It was Stephany's wedding weekend and it was so nice to see her again after such a long time.  I'll be posting about some of my other gluten free adventures in Denver this week. 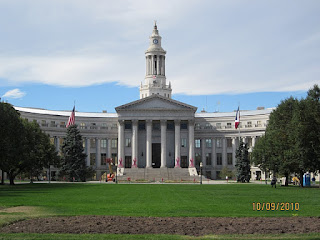