My friend Jaz and I checked out the new Mani's yesterday, aptly titled Mani's on Maple after its new location on Maple Drive in Beverly Hills.  Jaz was kind of enough to pick me up from LAX upon my return from Denver and we decided that Mani's was the perfect place to have lunch. 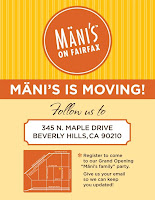 I was very excited to try out the new Mani's; I absolutely loved the old location on Fairfax and was hoping for a similar feel to this restaurant.

I was definitely not greeted by the old Mani's I used to know and love.  The location is particularly confusing; there is no signage and it is in a corporate complex in a semi-residential area.  Strange.  Then, upon walking in, there was nothing that said "Mani's" about the space.  Instead of the comfortable, small-ish feeling of the old restaurant, the owner implemented a drastically modern design.  The space is also enormous and a bit overwhelming.  It certainly did not feel like the old Mani's on Fairfax with its large "Bakery" sign; indeed, there were no baked goods in sight.  I was told by a waitress-in-training that the restaurant would soon open up a small bakery location in the courtyard of the complex for people to get their coffee and muffin and go.  I really miss being greeted by the delectable baked treats.  Mani's had a decent sampling of gluten free treats, none of which were mentioned on the section of the new menu which detailed the restaurant's baked goods.

On the plus side the restaurant now has a liquor license.  It was only 3:30pm when my friend and I visited so we abstained from drinking, but I am excited to try them out during my next visit. 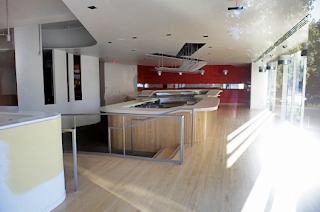 My friend and I were also disappointed when, after placing our orders, we were told ten minutes later that the restaurant only serves small plates after 3:30pm.  I guess there is a lapse in between the lunch and dinner menu... but I have trouble imagining that such an issue would have presented itself at the old Mani's.  We also walked in at 3:31pm and weren't warned about this quirky changeover period.  I ordered the salmon dish which was delicious... but I was really looking forward to the quinoa salad, my favorite lunch-time order at Mani's.

Of course Mani's has just opened and may be flexing its legs as it prepares to become a restaurant which is more geared towards power lunches and dinners.  Regardless, it is sad to see a perennial classic so drastically changed; I was a fan of Mani's for it's healthy vibe and casual atmosphere.  Sadly, both have been eschewed in Mani's new location.