I was recently contacted by MyBlogSpark about participating in a review and giveaway for my readers of Bisquick's new gluten free mix.  Obviously I jumped at the opportunity!  I was very excited when I received my package; it was heavier than I thought it would be when I first picked it up.  When I opened it and was greeted by a cast iron pan the weight was justified.  I had forgotten that they were including it in the package along with a "pancake pen" and spatula -- what a great surprise!  The sample, prize pack, and giveaway were all provided by Bisquick through MyBlogSpark. 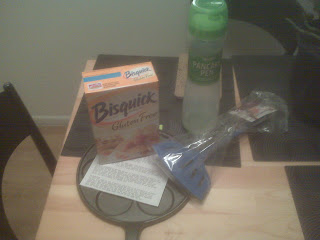 Unfortunately I'm not a good cook so I enlisted the help of my friend Chris.  I know, I know, pancakes aren't the most difficult item to make but isn't it true that food is better when somebody else prepares it for you?  This was definitely the case with the chocolate chip pancakes that Chris and I made using the Bisquick gluten free mix. 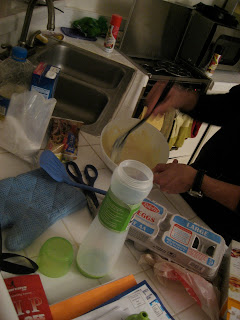 For the chocolate chips we used Ralph's brand of semi sweet chocolate chips.  They were perfect because they were marked "A Gluten Free Food"!  I've seen the marking on other products before but was glad to see it again.  I don't do much of my shopping at Ralph's anymore because I live closer to a Pavilions so it was a pleasant surprise. 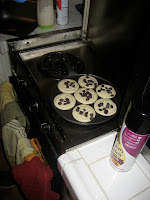 The pancakes were a bit difficult to prepare; our first batch didn't come out as well as our second match.  There seems to be some uneven distribution on my stove-top  Sadly it is also electric so it generally is not as good as a flame, in my opinion.  The pancakes didn't brown as easily as gluten-filled pancakes did, but we quickly noticed that due to the uneven distribution we had to rotate the pan along the burner.  Regardless of how they cooked, Chris and I devoured the pancakes.  He paid what I think is the highest compliment: "These don't taste gross or fake."  I agreed that they were excellent but it's been years since I had "real" pancakes so my comparison may be a bit off.
Overall, Chris and I had a great experience baking with Bisquick's gluten free mix.  The mix yields a lot of silver dollar pancakes (we easily made 10 using one cup of mix and the required additions).  I'm excited to test out the pancakes again on my own to see if I can replicate our success.  I'm also looking forward to exploring some of the recipes on the product's website.
Again, the product and giveaway were both given to me by MyBlogSpark.  On that note, the contest!  Check out all the different recipes Bisquick has posted using its mix here.  If you were to win, which recipe would you try?  Note that the giveaway comes with a box of Bisquick's gluten free mix, a spatula, a pancake pen, and a cast iron pan -- exactly what I received and a great bundle for your pancake-making needs.  Leave a comment below along with your name and e-mail address to enter.  That's it!  It's as simple as that.  This contest will run until November 2nd at 5pm PDT.
Do you love it or do you love it?
- - -
Bisquick Gluten Free
Posted by Stephen at 9:41 PM

I would want to try the Garlic Biscuits! Being from the South I miss a good biscuit with dinner on a chilly Fall night now that I am GFree! Bet they are delicious :)

If I won, I'd have to try the biscuits and of course the strawberry shortcake!

I would make the gluten-free Garlic Cheese biscuits for Thanksgiving dinner! And, also pancakes of course!

Garlic Cheese Biscuits are amazing! I would make those then use them to make bacon egg and cheese biscuits the next day.
YUM!
callieanne(at)gmail(dot)com

I plan to make Cheese Garlic Biscuits (Gluten Free) :) *Thanks* for the giveaway!
http://scr.im/ladybugemail

I would try the Gluten Free Impossibly Easy French Apple Pie (which might then become a weekly treat), the Cinnamon Streusel Coffee Cake (still haven't found a comparable gluten-free version of this), and the Impossibly Easy Cheeseburger Pie (look at those glowing reviews!).

The banana pecan waffles sound yummy but I do love pancakes too. I have never had choc chips in pancakes. I will have to try that. :-)
~K http://scr.im/nerak

I would make biscuits!
rosanova_family@comcast.net

enter me please, thank you for the giveaway

I am planning to make the Chicken and Dumplings (Gluten Free)

I would love to try the pancakes, chocolate chip please, and the strawbery shortcake. Thanx :)

I would love to try these pancakes with my family -- probably the Baked Chicken, since we never get to have anything "breaded" at the Harding house!

I would love to make the Impossible Cheeseburger Pie. It used to be one of my staples before I was diagnosed with Celiac Disease and I know my husband misses it.

Is the contest still open? Before GF, I liked to make a coffee cake and pancakes and biscuits with Bisquick. I haven't tried the GF version, yet.