I was a big fan of Top Chef Master's first season, particularly the episode featuring Zooey Deschanel in which the challenge was to make a gluten free, vegan dinner for Ms. Deschanel.  The winner of that season, Rick Bayless, is a Chicago mainstay (although his Frontera salsas are available nationwide). 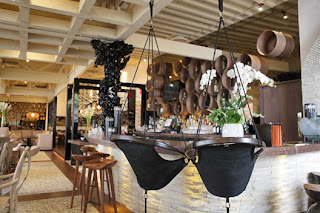 When I heard the new that Mr. Bayless would be opening a restaurant here in L.A., I knew I had to get a reservation.  This past Sunday my friends Travis, Evan, Allison and I went to Red O for the first time, thanks to Travis' impeccable reservation making abilities.  I had driven by Red O on my way to get a haircut at Rudy's down the street and was surprised by the exterior architecture.  Make no bones about it, Red O announces its presence near Melrose & Crescent Heights (close to the trendy Fred Segal boutique) -- you can't miss it.  Just as important, of course, is the interior architecture.  I think I've been to some great restaurants here in L.A., but Red O was definitely my favorite for its decor.  I felt like I was transported to Miami, complete with white wood ceilings, ceiling fans, palm trees inside the restaurant, a gorgeous bar area (complete with seats that are swings hung from the ceiling), and an awesomely comfortable couch table at which we were seated.

Unfortunately I have to add my own minor complaint: no shorts allowed for men.  I'm totally for a no shorts policy, don't get me wrong, but when I was forced to go home and change into jeans I became a bit frustrated.  My shorts weren't cargo shorts, they weren't jean shorts, they were clean cut khaki shorts.  But fine, they are trying to keep a dressy ambiance, okay.  But then how does the Manager justify letting a woman in whose dress was showing her private parts to everybody in the restaurant?  Seems to me that if I'm now allowed in my (perfectly appropriate, everything covered) shorts, then women should be held to the same standards.  This paragraph is a non-gluten free rant on the sexism of fashion and the inexplicable lack of dress code application to both sexes... hope you enjoyed it. 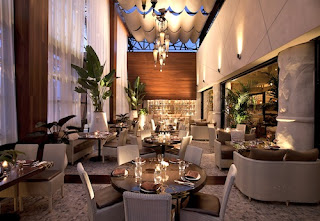 Now, back to gluten free food!  Unfortunately no pictures of the meal; after my experience with the bouncer I decided to play it safe and not get in trouble with the food photo police.  My friends and I started off at the bar with a few drinks; I went with the Sangria on the recommendation of Travis and Allison.  The drink was good, but I later feared that a liquer used in it was not gluten free friendly.  Next time, I think I'll stick with the Mexican Mojito... even though it was very strong.  It's not that I like my drinks weak, mind you, but I don't want the alcohol I drink to overpower the food I eat.

Once we were escorted to our table we were able to kick back and relax.  We had an amazing location in a back corner of the restaurant with an enormous round table for only four of us.  We were seated on a beautifully comfortable couch and were a bit seperated from the rest of the restaurant by a large black mesh screen.  I know that I'm not doing the restaurant's beautiful decore justice (those drinks really got to me) so check out Eater LA's writeup for interior pictures of the restaurant.

I wasn't particularly hungry so I kept my eyes trained on the left-hand side of the menu, full of small plates.  I asked the waitress for her recommendation between the taquito and the tamale.  She suggested I go for the tamale, as it was a more unique dish than the taquitos.  When I mentioned that I could not eat gluten, I detected a slight wince from my waitress.  Combined with a nut allergy at my table, I could tell we probably wouldn't be her favorite for the night.  She quickly recovered as I asked about the tamales and taquitos and told me that the tamales, taquitos, and sopes were all made from a corn base.  She also said she would check with the chef on anything I ordered, but that to the best of her knowledge those dishes shouldn't present any issue.  I went with the Goat Cheese tamale and was certainly not disappointed.  The tamale was unbelievably delicious and the presentation was great as well.  The ingredients tasted fresh and were interesting.  I really enjoyed the tamale and would definitely go back to try the chicken tamale or, if I were feeling hungrier, one of the larger plates.

I was really happy with the knowledgeable waitstaff at Red O who effortlessly helped me choose a delicious gluten free option.  I would definitely recommend this place to any gluten free eater in LA -- just don't wear shorts!