Last week I went with my friend Lindsey to check out The Pizza Cookery.  Truth be told I had a long day at the office and was not looking forward to battling the Los Angeles traffic to make my way out to the other side of the hill, but at the end of my meal I was certainly glad that I made it out there.

I'm not sure when I first found out about The Pizza Cookery, but it's been on my list of places to check out for quite some time.  When I finally got around to sorting through my bag of treats from the Celiac Disease Foundation Conference, I noticed a Pizza Cookery menu along with a gift certificate advertising the restaurant's gluten free and vegan options. 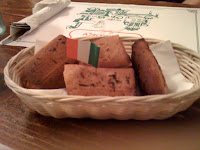 After sitting down, Lindsey and I embarked upon the mission of deciding what we wanted to order.  The restaurant's gluten free breadsticks are provided by The Sensitive Baker so I knew I couldn't resist ordering those.

Lindsey and I decided to split a large pizza with artichoke, garlic, and tomatoes.  We were also both happy to learn that the restaurant uses Daiya cheese.  Daiya is a great, vegan friendly cheese that is free of soy, gluten, dairy, whey, and nuts.  I was first introduced to Daiya by Fresh Brothers and have been a fan ever since.

When the pizza was served I was pleasantly surprised by its size -- this would definitely be enough for the two of us.  The flavors were also great and the Daiya cheese went perfectly with the toppings we chose.  I also found the prices to be reasonable at The Pizza Cookery, something I can't say for all gluten free pizzas.  The restaurant does not make its crust in house; it is instead made by a company in El Segundo and shipped to the restaurant.  I liked the crust and didn't find it to be obnoxiously thin and crunchy as many gluten free pizzas are prone to being.  I thought the crust, paired with our excellent choice of toppings and Daiya cheese, was a great example of a delicious gluten free crust. 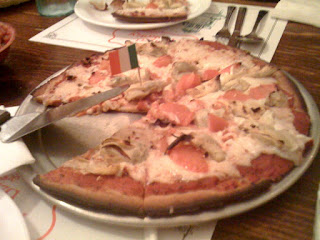 The restaurant also has every topping imaginable... or at least, I was lead to believe as such, as there was no actual listing of toppings.  I wouldn't say the service was top-notch as our waitress didn't seem particularly knowledgeable about gluten free issues, but she was helpful enough to bring us over the restaurant's binder of gluten free/vegan information so we could sort it out for ourselves.  Perhaps it was better that way, as we were able to examine for ourselves the gluten free and vegan options the restaurant had.

I would definitely visit The Pizza Cookery again save for one issue -- its far from me!  I'm not sure if I see myself headed out to Woodland Hills often, but at least now I (and you) know that there is a great gluten free option.

I also have to give a big thanks to Lindsey for being super nice and sending me home with two bags of gluten free groceries!  Her loss of soy in her diet is my gain, as I took a lot of the goodies we were given at the Celiac Disease Foundation's Annual Conference off her hands.