While celebrating my brother's graduation in Philadelphia, my father made sure that Buddakan was on our list of restaurants to visit.  Maybe he saw it in the original Sex and the City movie

during Mr. Big and Carrie's wedding dinner rehearsal.  Well... I know that isn't the case, but Buddakan is a well reviewed restaurant with locations in both Philadelphia and New York and for some reason my dad was particularly pumped to check it out. 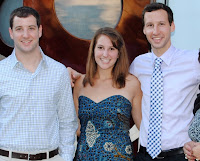 The night before Jeff's graduation we headed over for a late dinner reservation.  After catching a red eye to Philadelphia the night before, I was happy for the late reservation because it gave me adequate time to nap and recover from the flight.

I was a little nervous about eating at Buddakan because of it being mostly Asian food (with no sushi in sight).  I generally stay away from Asian food because of the sauces that are used in preparing many of the dishes.  My parents assured me that I would be able to find something to eat, and they were definitely right.  When I told my waiter that I was gluten free, he happily brought me out a gluten free menu detailing all of the options that I had.  I apologize for the blurry picture below -- my cell phone camera is in dire need of an update, I know.  Hopefully they'll come out with the iPhone for Verizon soon. 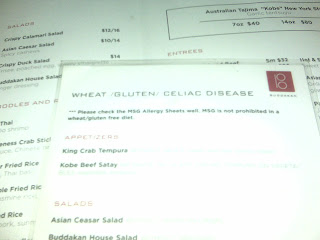 The restaurant serves its food up family style, so you should definitely go with people who are open to sharing gluten free dishes with you.  Luckily I wasn't eating gluten free alone -- my brother's girlfriend is also gluten free so we were able to split our dishes.  We ordered the singapore noodles, pad thai, sesame crusted tuna, and edamame.

The food was out of this world.  It's been so long since I've had pad thai that I forgot how great it was.  Buddakan's take on the dish was great, particularly on the side of the sesame crusted tuna.  I'm normally not a big fan of tuna, but I absolutely loved that dish and would definitely order it if I were to visit Buddakan again.

I wholeheartedly recommend Buddakan to gluten free people in Philadelphia for a fancy dinner out.  For you New Yorkers, Asia de Cuba is another great option with a gluten free menu.

Buddakan is my FAVORITE restaurant in the city! Can't get enough of that gold statue ;-)

yea, would have been better if you skip the pic altogether. A 5 year old would have snapped a better one.