Yeesh -- it's been so long since I've posted that I think my web browser has forgot how to load Blogger!  I truly apologize for the delay; final exams consumed my life from Mid-April to Mid-May and I've been traveling from coast to coast recently.  I have a ton of great posts lined up for next week so you have that to look forward to.

In the meantime, I was fortunate to attend Babycakes' inaugural Babycakes

Bingo tonight.  It is always a party when I visit Babycakes, making it one of my favorite gluten free spots in Los Angeles.  The people who work at Babycakes make the place a great place to visit as they are friendly, knowledgeable about gluten sensitivities, and generally nice people.  The design of the store is also cool and, of course, I'd be remiss if I didn't mention that the treats are out-of-this-world amazing. 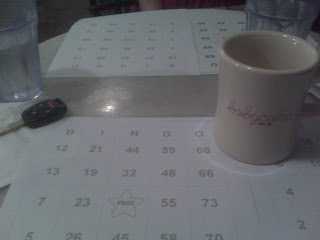 Tonight I brought my friend Lauren along for the ride.  Lauren's a picky eater -- last week I invited her to the opening of a raw vegan restaurant in Echo Park and she opted not to attend because she didn't think she could handle it.  OK OK fine, raw and vegan might be a lot to handle, but I'm very proud of Lauren for checking out Babycakes since there are no dead animals in any of the bakery's products.  Somehow they accomplish magical taste without dead animals -- crazy!

Anyways, back to bingo:  I've been tweeting with Babycakes' L.A. location and, after a little back and forth, tonight was confirmed as the first Bingo night.  Lauren and I showed up with time to spare before the 8pm start.  We split a cookie sandwich (divine) and a brownie mint cupcake (my personal favorite cupcake) before the games started.  For every $2 that you spend, you get a bingo card!

In total we played four games.  Lauren and I make a great team, as we won three of those four games!  For each game we won we were given two cupcakes.  For the first round we opted for a strawberry and an orange cupcake.  The strawberry cupcake was unbelievable!  The frosting was fresh and smooth and the cupcake itself packed a powerful strawberry flavor that made my night.  I didn't love the orange one as much (sorry!) but strawberry is now competing with brownie mint as my personal favorite Babycakes cupcake.  It may be a duel to the death.

The bingo games were accompanied by riddles, jokes, crowd shout outs, and a generally lively atmosphere.  I told my friend Lauren that I might make her join me for tequila shots down the street at the new bar Las Perlas before we head to Babycakes next time so we liven up the crowd.  For the first night, there was definitely a good showing of people.

Babycakes will be holding its Bingo every Tuesday night from 8pm-9pm.  I know I'll be there frequently  -- hope to see you there too!