My roommate from last year Vanessa told me about SunPower Natural Cafe so long ago that I had nearly forgotten about it.  While Studio City is pretty close to where Vanessa and I lived in Downtown L.A. (just a short drive up the 101), from West Hollywood it always seemed so... far.

Today, President's Day, was the perfect day to correct that line of thinking since there would be no traffic because of the holiday.  I met my friends Hilary, Anna, and Rochelle to catch up about our respective Valentine's Days and weekends.  It also wasn't far at all; my West Hollywood locale makes everything relatively close.

SunPower is entirely vegan and many of the options are also raw.  I asked the waiter which options could be made gluten free and he said that almost everything was already gluten free.  I ordered the "Raw Supreme Pizza,"  Hilary ordered the "Raw Pesto Pizza," and Anna and Rochell each ordered the "Kale Colossus" salad.

When the Anna and Rochelle's salads came out my jaw practically hit the floor.  The portions at SunPower are enormous; it's almost guaranteed that nobody will leave this place hungry!

My pizza, along with Hilary's, were beautiful. 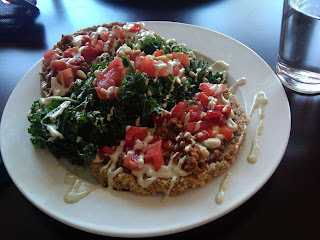 Its appearance was only second to its taste.  The crunch of the thick sunflower seed crust was terrifically bursting with flavor.  I'm normally a fan of a softer, chewier crust, but in this case the crunch totally worked for me.  The drizzle of macadamia cheese and "sausage" (read: sausage replacement made of nuts) was wonderful.  The kale salad in the middle created a healthy lunch that was bursting with incredible flavor.

My lunchmates were kind enough to allow me samples of their dishes, all of which were spectacular.  If you're gluten free, I would check out SunPower for the cafe's unique take on pizza.  While I absolutely love Real Food Daily's take on gluten free vegan pizza, SunPower has got them beat.  I'll definitely be visiting again soon.