My sister and I made the very smart decision to stop in at Bar Breton while we were both in New York City over the holidays.  We were mulling over a few different options, including my favorite Risotteria, but decided to go out on a limb and try Bar Breton's gluten free menu out.  After all, we are so infrequently in New York that it makes sense to try as many places as possible... and I had already been to Risotteria for lunch after a failed attempt to eat at Puff & Pao, which seems to have closed.

First off, the restaurant is very inviting.  Immediately when you walk in there is a long bar to your left; opposite that is a wall with built-in booths, each with adequate seating for two people.  This place screams (gluten free) date night. 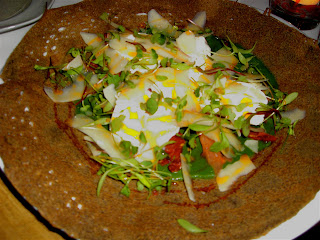 The night only improved from there with impeccable service and wonderful eats.  The menu is marked with a simple (GF) for dishes which are, or can be prepared, gluten free.  On some items, such as the French Green Beans & Phyllo Crusted Shrimp salad, directions are given to make the item gluten free.

My sister and I both went for the Goat Cheese & Sun-Dried Tomato savory galette.  A little boring, I know, that we both ordered the same dish, but it sounded so good we had trouble choosing something else.  When the dishes came out we were both surprised by the large portions.  The crepes themselves were flavorful but didn't overpower the flavor of the goat cheese and sundried tomatoes.  The dish was wonderful -- the galette was light and very similar to the crepes that I remember from my pre-gluten free days in Paris.

To top it off, they make a gluten free galette for dessert that reminded me of those Parisian crepes -- it came filled with nutella!  Moments after it was set down on our table, my sister and I promptly devoured it. 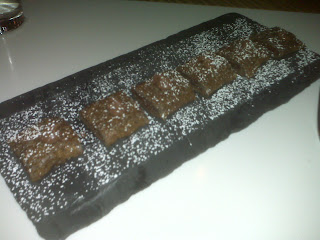 I know that New York is a little far to fly in order to try out these delicious dishes; luckily the Chef at Bar Breton has been in touch and sent me his recipe for the galettes!  Check it out here.

Overall, my experience was highly positive at Bar Breton and I can't wait to go back and try some of their other delicious gluten free creations.

I'm so glad that you were able to make it to Bar Breton and that you tried the nutella galette. I always have to get it, no matter how full I am...it's just that good.

Hope your trip to NYC was great! You'll definitely need to check out Pala on your next visit. :)