This will be a short post, but I wanted to update you about some disconcerting news.

I heard from my friend Justin, who works at Real Food Daily, that Green Leaves Vegan had issues with not being entirely vegan.  I snooped around the internet to see if there was any more support for what he said, and found a great post by Quarry Girl that tested 17 Los Angeles establishments that purport to be vegan.  In that post Quarry Girl admits that the study she conducted only represented a snapshot in time and that by the time readers checked out the post a restaurant included on the study may have changed its practices.  Green Leaves Vegan's establishment was understandably upset after finding out about Quarry Girl's post, as it finished as a "Big Time Loser."  Quarry Girl was threatened with legal action over her comments and updated her post with the letter sent to her by Green Leaves' attorney here.  Green Leaves even went as far as offering Quarry Girl the opportunity to retest its food;  this may render a vegan's concerns moot, but I wanted to provide the full history of Quarry Girl's study.

Why am I writing this post?  Well, after my visit to Xooro today, Hilary and I drove up N. Kings Road and hit a red light at Santa Monica Boulevard.  Right in front of me I saw "Green Leaves" with an abundance of promotional signs.  When I arrived home, I pulled up Green Leaves' website and saw that it listed the new West Hollywood location that I had seen. 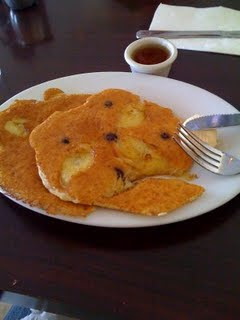 What was truly disconcerting, apart from the above vegan tests, was that I now do not see any items being marked gluten free on the restaurant's menu.  I'm not sure what caused this change, but I wanted to alert my readers as soon as possible that the pancakes I previously posted about may no longer be made in a gluten free manner.  I called the restaurant and they said they still had them, but I have not been able to visit the restaurant in person to confirm this.

I will check into this as soon as possible, but be warned before eating at Green Leaves Vegan that the items previously marked gluten free may no longer be made gluten free.