A representative from New Harvest Naturals recently contacted me and offered to send me samples of the company's gluten free products.  Of course, I happily obliged. 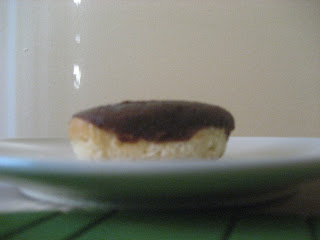 Now for the important part -- how do they taste?  In a word: terrific.  I tried the marble pound cakes first, and was very happy with the way they tasted.  Gluten free eaters know that when imitating gluten filled food without the gluten it is very easy for the results to go awry.  Such is not the case with New Harvest Natural's mini pound cakes.  They were soft and well flavored.  My only complaint about the marble pound cakes was that the marble was not swirled into the pound cakes.  Instead, the marble was often a distinct half of the marble cake. I would have preferred a more traditional swirled marble cake -- perhaps my box was filled with flukes, but they were all similar to the picture at left.

In addition to the marble pound cake I received a box of classic pound cakes and a box of raisin pound cakes.  The classic marble cakes were also great.  Of course they didn't have the chocolate flavor like the marble cake, I still devoured them pretty quickly. 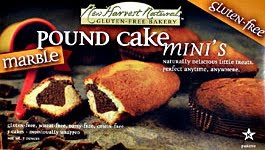 Last but not least, the raisin pound cakes.  These just weren't my thing -- raisins in bagels, bread, muffins, or anything similar is not my bag.  I did suffer through eating one for you, my readers, and it had the same texture and consistency as the other kinds of pound cakes.

I'm not sure if these are available in stores yet in Los Angeles; I've asked the representative who contacted me and will update the post when I hear back.  In the meantime, you can buy them through the link below!

New Harvest Naturals
Posted by Stephen at 10:43 AM