I just went to brunch at one of my favorite gluten free restaurants, Hugo's.  While walking through the West Hollywood Farmer's Market with my friend Sarah, another friend Iman messaged me and told me she was in the neighborhood and feeling hungry. 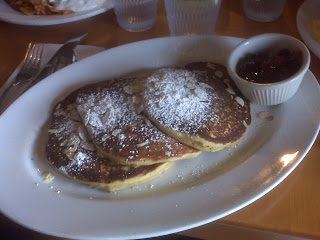 They didn't disappoint and were even better than the gluten filled pancakes I used to eat.  They were light and infused with citrus flavor.  They were also served with cranberries drowned in a citrus sauce.  Altogether, it was a great brunch.  Of course there was organic maple syrup at the table too -- because how can you eat pancakes without maple syrup?