About a month ago I began e-mailing with the owner of Fresh Brothers, Debbie.  Fresh Brothers is a great pizza restaurant in the South Bay which offers gluten free pizzas.  I had expressed interest on my Twitter in having a Gluten Freeways meet up, and Debbie offered to host the very first one.

After weeks of anticipation, Saturday was finally the day for the tasting.  When my friend Iman and I arrived to Fresh Brothers' Redondo Beach location, we were greeted by a few outdoor tables with "Reserved" placards on them. 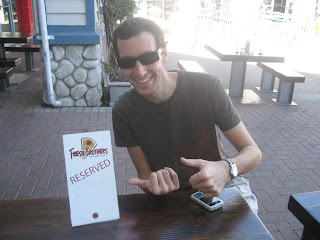 I had warned Iman not to eat before the tasting, because I knew that Debbie wouldn't let us down in providing us with an unbelievable amount of food.  I had stopped in to the Hermosa Beach Green Expo over the summer where Debbie was handing out Fresh Brothers to anybody visiting the Expo and from that visit knew that she had it in her to feed an entire village.

I certainly wasn't disappointed.  Within five minutes of the first guest's arrival, Debbie had us tasting some of her gluten free pizzas.  First on our plates were the Fresh Momma's Favorite, BBQ Chicken, and 'Da Works pizzas along with some Buffalo Wings. 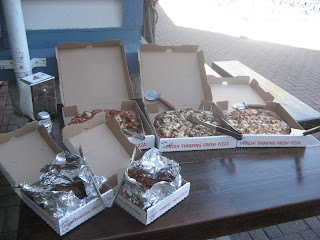 It was quite a spread.  Obviously, my guests and I didn't hold back.  It may have taken us a while to make it through the pizza, but we did a pretty good number on the spread that Debbie had so generously provided for us.

Perhaps just as important as the spread was the terrific quality of the pizza.  I've said it before -- Fresh Brothers is my favorite gluten free pizza in L.A.  I absolutely love the crust; it's not paper-thin and crunchy like many gluten free pizzas.  It also includes herbs to make it more flavorful; as if the flavors on top of the crust didn't help enough, you can order a pizza with less toppings and not sacrifice taste. 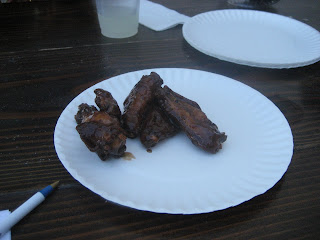 Of course, that first round of pizzas wasn't the end of our tasting spree.  Debbie brought out some of Fresh Brothers' wonderful Roasted Garlic BBQ wings.  Full disclosure:  before Saturday, I had never eaten a wing in my life.  Because of that, I can't compare these wings to other wings.  However, other tasters agreed that these wings were some of the best they had ever had.

Debbie concluded the tasting by bringing out two more pizzas.  What a way to end, right?  The first pizza was made with soy cheese and was loaded with green & black olives, fresh green peppers, onions, mushrooms.  Since this was a tasting, and Debbie wanted our honest opinion, we gave it to her -- the soy cheese was definitely not our favorite.  While it is an option for those who are dairy free, the cheese baked on top of the vegetables instead of meshing with the vegetables.  One of the guests at the tasting works at Hugo's and enlightened us about the problems of cooking with soy cheese -- it's difficult to prepare delicious dishes using it because of the way it cooks.  The problem encountered by Fresh Brothers in using soy cheese was not a unique one and was instead a common occurrence when using soy cheese.

After the soy cheese, we were all a bit nervous about the next pizza that Debbie brought out for us.  It was made with Daiya, a vegan cheese alternative free of nuts, casein, gluten, lactose, soy, corn, and rice.  Our skepticism increased when Debbie unveiled the pizza to us; in one taster's words, "it looks like fake food." 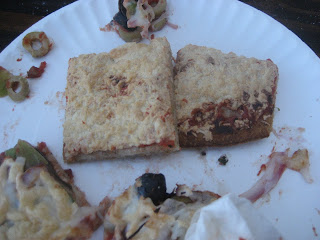 We swallowed our collective cynicism along with the Daiya topped pizza.  Our hesitations were immediately put to rest.  The Daiya pizza far surpassed the soy cheese pizza.  While the soy cheese had baked on top of the vegetables, the Daiya pizza had perfectly melted into the pizza.  Even better, it had a texture and taste that could easily be equated with dairy cheese.  If I were vegan (or had any allergy in addition to gluten intolerance), I would definitely choose the Daiya cheese instead of the soy cheese, and my fellow tasters agreed.  Vegans take note: a great way to eat Fresh Brothers is to order pizza with pesto sauce; the tomato sauce includes cheese.

Fresh Brothers is a deliciously affordable gluten free restaurant.  While Debbie provided the tasting for my readers free of charge, I've eaten there before and know that the prices are better than those of other gluten free pizzas in L.A. without sacrificing the great taste.

In a bit of great news, Fresh Brothers will be opening up its third location in Marina Del Rey in the beginning of November.  That makes Fresh Brothers that much easier to get to for us who don't live in the South Bay.  Debbie expressed interest in expanding her business north of Marina Del Rey -- do you have any suggestions for great locations?  Leave a comment!  I told Debbie I'd love to see a Fresh Brothers in West Hollywood... I'm keeping my fingers crossed.

Thanks to all of the readers that made it out to the tasting.  Do you have any suggestions for our next tasting?  Leave a comment, and I hope you can make it to the next one.  Thanks again to Fresh Brothers for hosting the first (of hopefully many) tastings!

This event was a great success! I look forward to your next tasting, as I'm sure all of your readers do too!

GREAT post as always!!! so bummed I missed it - next time I will be there with gluten-free bells on! I agree with you, a West Hollywood/Hollywood location would be perfect! maybe you could arrange a Babycakes tasting once they open - that would be amazing!