Today my friend Hilary and I went to Xooro to indulge in some churros to celebrate her birthday.  Unfortunately, the nearby West Hollywood location didn't have gluten free churros.  She picked me up and we drove over to the Santa Monica location; I've been telling Hilary about the churros for months so we were very excited as we walked down Broadway to finally have them.  Little did we know that Xooro in Santa Monica is closed on Mondays!

As we dejectedly walked back to the car, we squabbled over what treats we wanted.  Millions of Milkshakes?  Yogurt Stop? Hugo's? Real Food Daily?  We had some tough decisions to make but ultimately ended up headed to Real Food Daily's West Hollywood adjacent location on La Cienega.

I've written about Real Food Daily before (here) and was really excited to check out the new menu, which lists certain options as wheat and gluten free.  The entire restaurant is vegan and, to my knowledge, is one of the premiere vegan places in L.A.  Correct me if I'm wrong, vegans!

As Hilary and I perused the menu, we settled on splitting our lunches to maximize the variety of flavors. We started with the Not-chos, which came smothered in vegan cheese, fresh guacamole, black beans, pico de gallo and tofu sour cream.  Please excuse the poor picture quality -- my cell phone camera is no good. 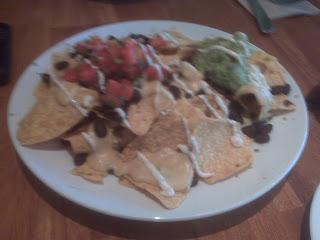 The nachos were awesome!  The waitress told me they aren't marked on the menu as gluten free because of the taco mix which can be added to them.  We steered clear of the taco mix and had this enormous portion as our appetizer.  The guacamole was my favorite part, as it was really fresh and creamy.  We ordered the chips with the Jalapeño cheese, which the waitress told us was only a little spicy.  I'm not sure what her definition of spicy is, but Hilary and I were left begging for more water!

For our entrées we ordered El Bandito Rojo and Pizza You Can Eat-Za.  We learned from our spicy mistake in ordering the jalapeño cheese and opted for the normal cashew cheese. 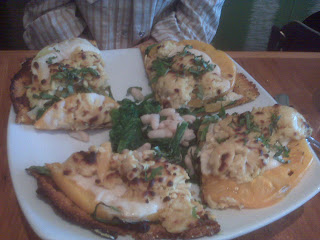 When we were served our entrées, our jaws practically dropped.  We were both feeling pretty full after the not-chos and weren't expecting there to be such enormous portions.  Regardless, we both started noshing on the pizza and were really happy with the way it tasted.  It wasn't a pizza that you could pick up and eat but instead required a fork and knife.  The crust was thin and crispy and consisted of a rice and polenta mix.  The pizza was stacked with great flavors -- heirloom tomatoes, vegan cheese, sautéed greens, sun-dried tomato pesto and more.  I went nuts for the pizza because of the unique crust.  The pizza was certainly not trying to imitate gluten filled pizza (or a pepperoni pizza, for that matter) and it was very successful in being delicious in its own rights.

We capped the meal off by biting into our Bandito Rojo.  I've had this dish before when I went to RFD with my old roommate Vanessa, but I didn't remember it being as good as it was. 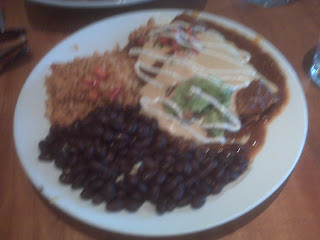 The dish was served up with soy tempeh, fresh guacamole, black beans, and delicious rice.  The dish was good, but not as outstanding as the pizza.  The pizza's fresh and unique flavors, along with the fresh tasting not-chos, put the meal over the top into the excellent category.

They practically had to roll us out of the restaurant when we were finished eating all of this awesome gluten free food.  Luckily, my friend Justin's shift started right as we were leaving so I was able to see him in his native RFD habitat.

That's so crazy that they knew you were gluten free and still let you eat there. When I've been before, I tell them that I have Celiac's and they won't serve me. The hostess told me that the gluten free food is only for people who are doing it for dietary reasons, not for medical ones. Apparently, they prepare the food with the same equipment that they prepare the gluten food with, so cross contamination is pretty much guaranteed.

The woman basically escorted us out of the store and refused to serve us once I said I was sensitive to it. I appreciate their concern for my health, but they kinda treated me like a leper once I told them I had Celiacs. Did you have any sort of reaction to it?

Did you visit with the new or old menu? I didn't mention a sensitivity to it. I also had no reaction -- but I did make sure everything was gluten free. She was very helpful.

I'm sure they were concerned about liability. As I said in my first blog post, eater beware, as my sensitivity may be different than yours.

I'm sorry to hear that you weren't able to enjoy RFD. Hopefully if you visit again they will be more accommodating, although I can certainly understand why you wouldn't want to.