I've written about Maria's Italian Kitchen Downtown previously (check it out here) but had never been to the restaurant myself. My friend Dana recommended Maria's to me after she noticed that one of the options on the menu was marked "gluten free."

Now that I'm in my second year of law school, I can breathe a bit easier and relax. My lunch breaks are longer, the reading isn't quite as dense -- life is altogether better. Maria's is also now offering a full gluten free menu, and with the decreased study time needed for school, I thought it would be a good time to check it out for myself.

As we entered Maria's, we were greeted by a very friendly hostess. She supplied me with the restaurant's gluten free menu and was told me to advise the waiter that I would be ordering gluten free. My friend Hilary offered to eat gluten free with me, so we ordered the Pomodoro Risotto and Santa Rosa Chicken. After ordering, the waiter asked us whether we wanted pasta with those dishes, to which I heartily answered "No! We are gluten free!" He said it was his first time dealing with gluten free, so my friend and I reminded him that on the menu it says to request mashed potatoes instead of pasta.

While we waited the server brought us bread and knew enough to put it on Hilary's side of the table. For any gluten eating readers out there, she said the bread was delicious. Hopefully they can come up with a gluten free bread that is also delicious, because it looked great!

When our food was served, we were a bit confused. The chicken came out and it was...interesting. 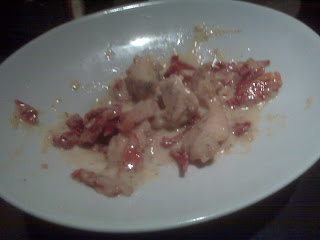 It seemed like we had just ordered from P.F. Chang's, as the chicken was cubed and not a breast. We were both confused - is this how non-gluten free chicken is also served? The plate had about 6 pieces of the cubed chicken on it. When we looked around the room, the other diners' portions looked enormous. Apart from its size, the chicken was just OK. Frankly, it is a good thing that I am a lifeguard because the chicken was drowning in the sauce it was served in. The sauce was not especially flavorful and altogether bland.

Even stranger, a few minutes after our chicken was served our waiter brought us our Pomodoro. However, it was Pomodoro...without the risotto. It was just Pomodoro sauce. Granted it was our waiter's first time working with the gluten free menu, but if the restaurant is providing such a menu it should train its staff to be knowledgeable about gluten free options. When we explained that we had ordered the Pomodoro Risotto he looked generally confused and said, "But you can't have the pasta." Once I explained that the risotto was gluten free (and on the gluten free menu!), he fixed the mistake and brought us out some piping hot Pomodoro risotto. 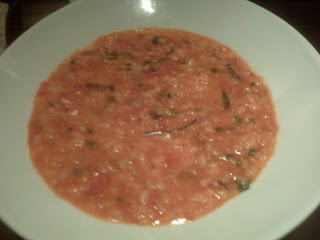 The risotto was good, not great. Like the chicken, it was swimming in a not particularly flavorful sauce. Overall, it was OK, but not great.

My friend and I risked our luck and ordered the gluten free flourless chocolate cake. This was one part of the meal that did not disappoint. 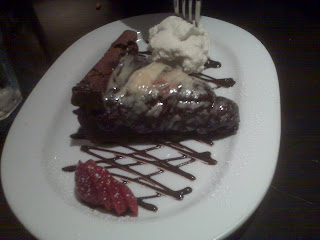 When we originally arrived at Maria's, we had to hunt for parking. Unfortunately, we parked at 611 Figueroa Street, which is where we thought the sign in front of Maria's directed us. After we had eaten, we realized that parking for Maria's is at 616 Figueroa Street (Map); anybody who has tried to visit Downtown during the workday knows that parking is no easy feat. My friend and I ended up paying $17.50 for 80 minutes of parking! That was the end of a frustrating lunch experience...

Overall, I can't say I enjoyed the meal. The chicken was too sauced (and cubed!) to enjoy, and the risotto was just OK. The one thing to check out Maria's for is the flourless chocolate cake!

oh my gosh stephen, what a crazy nightmarish experience!!!! And why on earth is Marias using flour in their Mashed Potatoes?? What could they possibly be flouring? ummmm....weird!!!!

Say No To Gluten said...

Against my better judgment, I too decided to try out their supposed gluten free menu. I opted instead to substitute for risotto (good thing I did by the looks of the review above!). What I didn't expect is that they would charge $3.00 per serving. We still went for it since risotto was better than nothing, upping our total about $6.00. We specified repeatedly "no gluten" "allergy" etc. (since a lot of people don't understand celiac/gluten intolerance). We also said no onions. So imagine my surprise when the risotto came out chock full of onions. Had we not been out with a coworker, I would have definitely raised all of these issues. At the end of the meal, big surprise but I got extremely sick. Thankfully I had a bottle of some gluten enzymes (Countrylife and Apex seem to work for me, not so much on the enzymedia) so I'm feeling a little better now. I'm still annoyed I'm going to have to go through the rest of the symptoms though.

On a side note, the third person with us did not order gluten free and was extremely dissatisfied as well. Her meal was all tomatoes w/ no pasta. None of us got drink refills as well.

Horrible place. I generally at least call the manager afterward whenever I've had a bad experience (and I can count all of them on one hand, since I'm pretty easygoing) and give places a second chance...especially if I'm a repeat visitor. But this time I just give up. If you can't make good on your gluten free promise, give bad service, charge an arm and a leg, and can't get the order right, then I don't feel the need to go back.