From the moment I was invited by my friend to go to Vail, Colorado over Labor Day, I knew that I needed to investigate some gluten free spots. Two of the spots that came up were Larkspur and Larkburger; they are jointly owned. Larkspur was a bit fancy for us; my friend Jon had eaten at Larkburger previously and recommended it as a "burger joint." 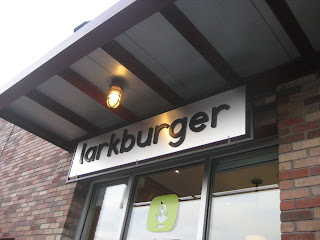 I was excited to see that the online menu says "Ask about our gluten-free menu options." Once I read that, I knew it was on our list. 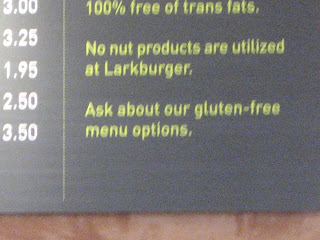 When we walked in, I immediately asked about the gluten-free options available. They offered to wrap the burgers in lettuce and said that every burger on the menu was gluten free. I ordered the Truffle Burger, which was served with truffle aioli. My regular readers knows that I love The Counter and the burgers there. However, nothing can compare to Larkburger's Truffle Aioli burger. It was heaven in a lettuce wrap. It was meaty, juicy, and perfectly flavored with the aioli that it was served with.

I've been to In-N-Out before and had the burgers "protein style" so they were not served with a bun. Larkburger served their gluten free burgers similarly but instead of the iceberg lettuce that In-N-Out uses, Larkburger wraps their gourmet burgers in leaf lettuce. The lettuce made the burger way more fancy than In-N-Out, although not that much more expensive -- two burgers (one gluten free and one with bread, for Jon) and an order of fries came out to about $17, and we were plenty full after our meal. 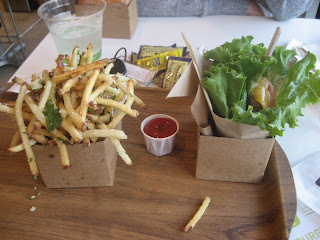 We also ordered the truffle & parmesan fries, which are shoestring fries. Some Celiacs may be more sensitive to fried foods but I allow myself to indulge in them. I've never had a better burger and fries. The fries were amazing; generously dusted with truffle oil and parsley with a perfect amount of parmesan added. When I initially bit into my burger, I realized that it was going to fall apart because of the lettuce wrap. I used a fork and knife to eat the rest of it, and after devouring that moved onto the fries. I could barely contain myself with the scrumptious food.

An update from a fan of the Fort Collins CO Larkburger - they have gluten free burger buns! I would guess that the other locations would offer that as well! Additionally - they only fry french fries in their oil so it should be as gluten free as fries can come! Glad you love larkburger - I do too!!