I've done my fair share of gluten free Italian eating in New York City, and I was surprised to learn of a restaurant called Bistango. I had never heard of the restaurant, but I found out that it made almost everything on its menu gluten free in a dedicated gluten free area of its kitchen.

I knew that I had to try this place out, so I met up with my parents and friends and we headed to Bistango. When I sat down the waiter asked the table if anybody had any allergies or dietary restrictions. I told him of my need for gluten free food, and was pleasantly surprised to hear that everything on the menu save for the Ravioli could be made gluten free.

Even better, the waiter brought me out two delicious slice of gluten free bread while everybody else snacked on their gluten filled bread. As far as gluten free bread goes, this was some of the best I've ever had. It's been so long that I've had bread in an Italian restaurant (let alone pasta) that I was perhaps overexcited about the bread brought to me. 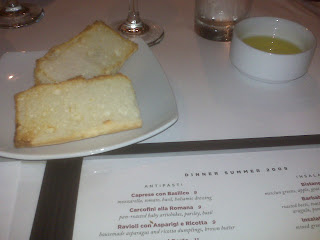 It was difficult to choose from the menu, because everything looked so good! For my appetizer I chose a simple dish, Caprese con Basilico. Normally Caprese salads are gluten free, so I didn't think much had to be changed to prepare the dish. Once it was brought out, I immediately dug in -- I hadn't eaten in hours and was starving. The mozzarella that the restaurant used tasted fresh and was well-sliced, not too thin and not too thick.

For my entrée I went with the Capellini con Gamberetti e Carciofini. It was terrific! While it wasn't made with angel hair spaghetti, I wasn't disappointed in the dish. 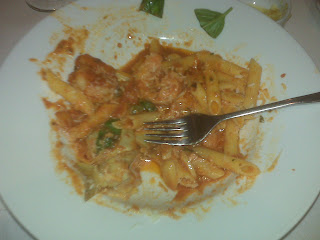 The portion sizes were great; they were so great in fact that at the end of the meal my table let out a collective exhale because we were all so full! My friends also ordered two gluten free dishes so that we could all share. Jon ordered the Mezza Rigatoni alla Ragu, while Elien ordered the Pennete al Pomodoro con Melanzane. Both were awesomely delicious, although I preferred my dish. I'm a shrimp fan, and the shrimp were cooked to perfection.

I spoke to the owner after I ate dinner to learn about why Bistango started offering gluten free options. He said that the Celiac community in New York had requested it from him, and that he had been making it because of them. He was extremely nice and wanted to know every detail of what I thought about the food.

Bistango is a great choice for Italian food in New York City -- I will definitely go back on my next sojourn to Manhattan. Check back soon for two more posts about gluten free Italian places in NYC.