Café Flourish is a little place on Wilshire, right by La Brea. The café does not use any animal products in creating its food, so everything is vegan too.

I ordered the Mac & Cheese to go -- it was labeled gluten free on the menu. When I was called up to the counter to pick up the mac & cheese, the server gave me directions about how to heat it up. I was discouraged, however, when I noticed she included a container of bread crumbs with the dish. I asked if they were gluten free, and she said no. It made me nervous that they may serve up the Mac & Cheese with these breadcrumbs regularly. Definitely make sure to specify that the bread crumbs should not be used! 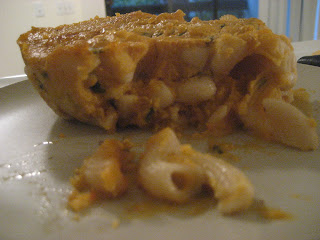 I took the Mac & Cheese home and heated it up the next day and it was delicious! It's a little spicy, but the flavor was great. Café Flourish uses rice elbow noodles and soy cheese. Normally soy cheese wouldn't appeal to me so I was definitely surprised by the flavor of the Mac & Cheese.

I also bought a whoopie pie, consisting of two small chocolate cookies with something resembling cool whip in the middle. The whoopie pie was pretty plain and not flavorful. I would not order it again. 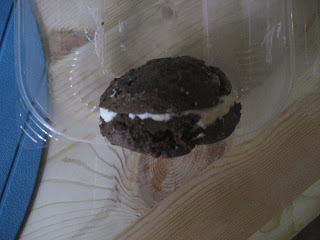 When I spoke to the chef at Café Flourish, she said that many of their dishes could be prepared gluten free very easily.

Because bread crumbs on a plate without gluten?
Definitely the spread of Celiac sprue is essential.
I feel that little is done.
Let's keep spreading.
Thank you very much dear friend as always (!)
fondly
sonia gluten free