No, you have not ventured into an R-rated site. I just had my first Pink Taco experience and am happy to report that it was a positive one.

I rounded up a bunch of us rising second year law students to enjoy a happy hour at Pink Taco's Century City location. I'd been hearing about this place since I moved to L.A. last August and now that I finally have a life again I knew it was time to check out what everybody was talking about.

I was mostly surprised by the quality. We started off with some guacamole and chips, which were both delicious (and gluten free, as I was told). Of course, check about cross contamination if you are concerned about the chips, as they may be fried in a common fryer. Then we moved on to the real reason we were there -- for the happy hour drinks! Pitchers of margaritas were only $15 from 3pm-7pm. The sun was shining, there was excessive alcohol, and all of us were beaming with happiness that we finished our first year (and survived!). All in all, a great time.

After a few drinks my friend Hilary told me she was going to order the Sabana de Pollo and that I should try it before ordering my own. When it came out, I was shocked -- the dish was enormous! She graciously let me split it with her, and it was then that I fell in love with Pink Taco. The dish tasted like pizza, or at least what I remember of wheat-filled pizza. The chicken acted as the crust, albeit chewier than most crusts I remembered. The dish was delicious -- thanks Hilary for guiding me on my first Pink Taco trip! You can check out the menu for yourself here. 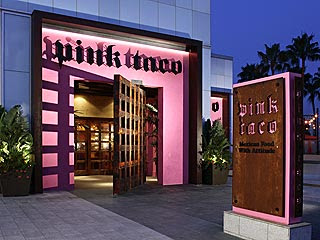 The one facet that was surprisingly bad was the service. After my roommate and I yelled, in unison, for a waitress she still did not respond to our requests to place an order. I had to walk over to the bar and ask her to come back to our table so we could place an order. Yes, of course, it was happy hour, but we had a table of at least 10 people and were ringing up a large tab, so we expected better service. I guess she knew that the gratuity would be added on no matter how she treated us.

I tweeted Pink Taco before going, and they assured me that the staff would be helpful about choosing GF options. I did ask about the Sabana de Pollo and was told I was in the clear; however I did not ask more extensively. Maybe the bad service was because I was in a big group -- regardless, I will certainly be checking out Pink Taco again and sampling more of the gluten free options available. You can follow Pink Taco on Twitter here.