I know I'm a bit behind this curve, but Chex has released a few new gluten free flavors just in time for the summer. The first flavor I noticed at my local grocery store was Corn Chex. The new boxes are marked "Gluten Free" in large lettering (see the below photo for an example). I neglected to pick up a box of Corn Chex and instead stuck with my tried and true favorite Rice Chex. 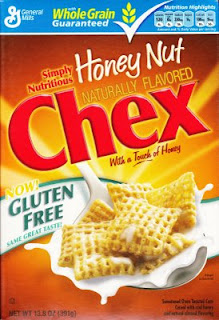 However, when I saw Honey Nut Chex on display at my local Ralph's I jumped on the chance to try the new flavor. I was certainly not disappointed -- Honey Nut Chex is a welcome break from the regularity of Rice Chex. The cereal is delicious and is a whole grain cereal with 10% of your daily calcium requirements in each serving. However, it also contains 230mg of Sodium per serving.

I have yet to see other flavors marked gluten free on the shelves yet, but according to Chex's official website the following flavors will be gluten free and marked as such: Rice, Corn, Honey Nut, Chocolate, Cinnamon, Strawberry.

My family has tried almost all of them - the definitely liked the Chocolate and the Cinnamon.

I bought the corn flavor the other day. Chocolate? I think that will be my next purchase! :) Yeah for Corn Chex!

I was home yesterday and I was told that the Strawberry Chex is really good.