I just had a great time at an early screening of the upcoming film "Julie & Julia," starring Meryl Streep and Amy Adams. With a little bit of sweet talk I was able to get myself into the screening and was not disappointed. 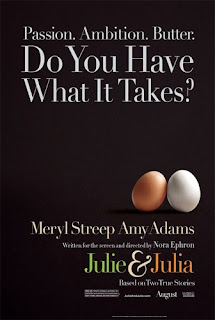 I think, after reading my blog, you can agree that I love to eat! This movie is all about food -- how to prepare it, eating it, writing about it, discussing it, debating it. It's a completely food-centric movie so for all you foodies out there you will love it.

The movie is about a woman, Julie, who is a 30 year old wannabe writer working at a dead-end job in Manhattan. She lives in Queens with her husband above a pizza place. After her friend starts a blog she is inspired to start her own, and decides to cook all 524 recipes in Julia Child's cookbook within 365 days. Amy Adams stars as Julie, a woman clearly unhappy at her job who is immediately wrapped up in the adventure of blogging and trying all of Julia's different recipes. 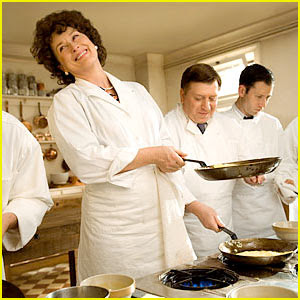 Concurrent to Julie's storyline is Julia Child's own story of how she came to be, well, the Julia Child. Meryl Streep brings Julia Child to life in a way that no other actress could -- her affect, her gait, her joie de vivre is all intact. Stanley Tucci, who previously co-starred with Streep in "The Devil Wears Prada," here plays her husband.

The film impressively blends the highs and lows of the two women's lives without having the effect be jarring. Streep perfectly imbues Julia with appropriate emotions through the highs and lows of her career (her start at Le Cordon Bleu, and her onion-filled night thereafter, was a particularly engaging sequence). Amy Adams as Julie connected with the audience, and she played her character well as somebody who quickly became consumed with a fun idea that turned into a responsibility. Julie has her own highs and lows throughout the movie and Adams conveyed her emotions excellently. Stanley Tucci as Julia's husband was terrific, but it was truly Streep's film as her pitch-perfect performance as Julia really stole the show. I did, however, also enjoy the snotty French woman who ran Le Cordon Bleu and told Julia that she had no real talent as a chef. Ha! I think we all know who had the last laugh.

I'm trying to keep my description pretty vague and not say much (because I know I'm not supposed to), but the film was terrific. From start to finish I enjoyed it; if I had one criticism it would be that the ending is a bit abrupt and left me wanting to know how these stories continued. There was a bit of a "Star Wars" scrolling information after the film, but the information provided was the bare minimum.

Most importantly for us foodies -- the food! The food was shot lovingly by Nora Ephron (of "You've Got Mail" and "Sleepless in Seattle" fame). While many of the recipes featured in the film were not gluten free (I was drooling over the bread Julie made in one of the beginning scenes), but the ones that are look absolutely scrumptious.

This movie is amazing for both foodies and non-foodies alike. The story of how Julia Child came to be published and the story of an upstart blogger gaining fame showed interesting parallels to the way things used to be done back in Julia Child's time and how publishing discovers its hot properties now.

Email ThisBlogThis!Share to TwitterShare to FacebookShare to Pinterest
Labels: Personal

I saw a preview for this movie last night and am looking forward to seeing it!

Now I've seen everything...The boy used to make fun of ME for being obsessed with food!!!

This was a great movie! I was soooo inspired by her that I finally decided to start my Gluten-Free Blog. This movie is a must to own!

Just in case anyone wants to stop by, my blog name is: http://www.goodiegoodiegluten-free.blogspot.com/