My parents are in town and, after reading the L.A. Times' review of Rivera, I decided to check Rivera out with them.

I was very pleased with Rivera. My waitress was extremely helpful in choosing a gluten free dish and was conscious of my Celiac when I was choosing a dish, going so far as to suggest certain dishes which would be accommodating. To start I had the xnipek. I was originally a little turned off by the the dishes description of "Dog's Snout" salsa (it sounded a bit foreboding) but really enjoyed the spicy salsa that was served alongside thinly curled corn tortilla chips. 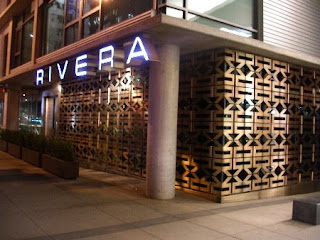 For my entrée I ordered the trucha, a Tasmanian sea trout served with saffron quinoa and yellow gazpacho sauce. If you're a Celiac you probably already know that quinoa is a great gluten free gain, and the pairing here with trout was delicious. The dish needed a bit more sauce to add more flavor to it, but otherwise it was great.

For dessert my waitress made sure the estudio en flan was gluten free, and it was. Flan is a traditional Spanish dessert that I ate plenty of times while living in Spain. The plate was artfully decorated with three different flavors of flan accompanied by three different sauces to go with the flan.

I would highly recommend Rivera to discerning Celiacs; the help was very friendly and, although they don't have a gluten free menu, the serving staff seemed prepared to answer all of my questions about the preparation of the food. It's a very cool spot in downtown that fills up with a later crowd. Don't be fooled by the fancy decor, however; I was told that it is perfectly acceptable to eat at Rivera in a t-shirt and jeans after enjoying a game at the nearby Staples Center.

I just can't believe that you, the boy who once said he wasn't a foodie, writes to descriptively and spectacularly about everything you eat!!!!!!!!