Gluten Free beer, you ask? Yes, it does exist! 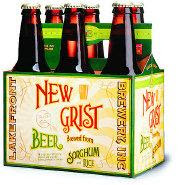 The other day while I was shopping at Locali (look for a full post later), I picked up a bottle of New Grist and decided to try it out. I haven't tried a gluten free beer in years, after my brother bought me a six pack while I was a sophomore in college. Even though in high school I drank my fair share of beer (ssshhh, don't tell my parents) once I was diagnosed with Celiac I cut beer out of my diet.

After tasting New Grist... I probably still won't add it to my diet. I think beer just isn't for me. However, in my (limited) experience) with gluten free beers, I can definitely say that this one is great. Unlike other gluten free beers, New Grist isn't too heavy and tastes like beer, from what I remember.

Other gluten free brands on the market include Redbridge, Bard's Beer, Ramapo Valley Brewery, Shakparo Ale (although this may be in limited release),