I'll be upfront: I'm not a baker. My roommate Vanessa and I recently embarked on my first baking experience. Now I'm not sure if I can ever turn back; I'm addicted.

We started off with something very simple -- a Trader Joe's Gluten Free Brownie baking mix. With only six steps, listed on the back of the package, until I was gorging ourselves on GF brownies, I thought I could do it. 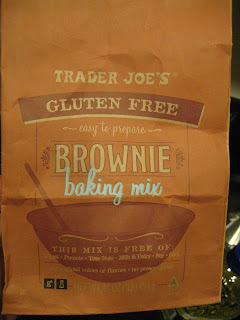 Boy was I wrong. Even with Vanessa's professional help, the brownies were a disaster. I'm not sure if this is my fault or the mixes fault, but after following the directions exactly (mixing 1 Egg, 1/2 Cup Vegetable Oil, 1/4 Cup Water, and brownie mix) neither of us felt like the mix was meshing correctly. We added some Blue Diamond Almond Breeze to try and get some more liquid involved, and then it seemed to be working better. 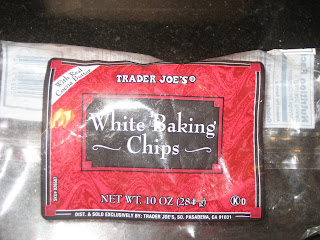 Then we added some Trader Joe's White Baking Chips (also gluten free) to the mix to enhance the flavor. 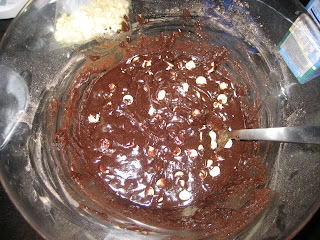 After pouring the mix into the bowl as directed on the mix's package, I put the brownies into the oven. 30 minutes later, the brownies still weren't done. 1 hour later, they STILL weren't done. I'll take the blame and won't place it on Trader Joe's -- I think adding the Blue Diamond Almond Breeze was a step in the wrong direction. Whoops.

The results were mixed. Of course I'm still eating them (I'm a starving law school student, can't throw away edible GF brownies), but I would definitely not serve them to any of my friends.

I'm interested to know -- has anybody tried this mix with better results?

Trader Joe's L.A. Locations
Posted by Stephen at 9:22 AM

I am gf and I made these for someone with egg allergies so I added applesauce and it made it more moist. I think it helped :)

I love the step-by-step pics.

I have made these twice. The first time I added more water and they never quite cooked. The second time I followed the recipe exactly and they looked like a giant shriveled raisin in the pan.