There's Always Time for a Milkshake

I've mentioned before that I am a sucker for treats. Give me a bag of Peanut M & Ms (as my sister recently did for Valentine's Day -- thanks Alyssa!) and I'm happy as a clam. I moved out to L.A. in August and in the beginning of my time here I was going out all over the city. I was spotted in Downtown at The Standard, Venice at a friend's housewarming party, Newport Beach at The Arches, and West Hollywood. I'm looking forward to moving out of downtown and getting close to the bar strip on Santa Monica Boulevard, and my craving for milkshakes is one of the main reasons...

One of the first nights I went out in West Hollywood I met up with college friends at Fiesta Cantina. We imbibed in a bit too much "fiesta" and naturally had the late-night munchies when we left the bar. Lucky for us, Millions of Milkshakes had just opened up down the street. Frankly at first I was repelled by the milkshakes. It was inconveivable to me why anybody would order a milkshake with gummy bears, Nutella, and Peanut M & Ms mixed in. 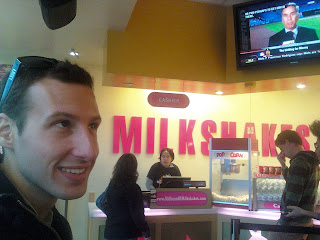 Six months later, I found myself drawn back to the land of milkshakes after having my fill of Robeks. I recently went back, albeit not after a night of drinking. No, instead it was after an exhausting day on Robertson (the clothes won't buy themselves!) with a friend visiting from New York. I had to try and show him a little bit of L.A. flavor and I thought it best to take him to Millions of Milkshakes. The moment we walked in we were greeted to blaring Britney Spears singing about the paparazzi. The menu was a bit overwhelming at first, but when I set my eyes on the options displayed a la Pinkberry I knew what I wanted. I ordered a Soy ice cream base with Peanut M & Ms, Nutella, and gummy bears as "toppings." Yes, I know, exactly what I said I didn't want above, but I decided to just go for it. My friend only went halfway crazy and ordered a yogurt base with banana and Peanut M & Ms as toppings.

In spite of the Miley Cyrus playing in the background (this place is one of her favorite stops), we waited excitedly for our drinks. When they were served up, we were not dissapointed. The gummy bears were not as chopped up as they could have been, but my milkshake was still drinkable. My friend's was delicious (and probably more healthy!).

The best part is -- the milkshakes are entirely GF! The staff was very helpful in showing me the ingredients of the Soy ice cream used to verify that it was gluten free. In WeHo and looking for a late night GF snack? Millions of Milkshakes is your spot.

I'm going to have to disagree: I thought the gummi bears were chopped the perfect amount. Given the fact that you are generally prone to consuming what can only be described as a chaotic cyclone of confection, I initally was perturbed that you ordered gummi bears in a milkshake. After I took a sip of your milkshake (excuse me, it was really more of a chug because the sheer volume of blended candy could not travel up the straw easily), I was surprised to find out that the gummi bears were a perfect addition to the shake. Fruity, chewy and sweet, the bits were interspersed perfectly through out the chocolaty entirety of the rest of the drink.

Thanks for your comment Joan. I'm glad you enjoyed Millions of Milkshakes too. Next time it's on me.