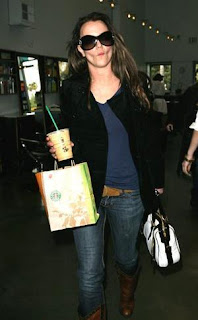 I've been hearing a lot of buzz lately from other Celiacs-in-the-know that Starbucks has been testing the idea of offering gluten free sandwiches, pastries, and other items in their nationwide cafés.  This, along with news that the international coffee chain will stop continuously making decaf coffee past 12pm, presents some radical changes for the coffee conglomerate.
While here in L.A. the brand may not be as omnipresent as the ubiquitous Coffee Bean & Tea Leaf, there are still enough Starbucks that if the chain were to begin carrying GF food it would be an enormous benefit to all of us gluten-sensitive folk here in L.A.  I know that here where I live in downtown L.A. there are about 15 Starbucks within walking distance.  Yes, you read that correctly -- walking in L.A. Crazy.
I remember when I was in London in January '07 a friend and I walked into a Starbucks.  I didn't expect to find anything other than a protein-laden packaged smoothie, but much to my surprise the Starbucks carried freshly made Starbucks brand gluten free sandwiches!  And they were delicious to boot!
It's up to each of us to go to our local L.A. Starbucks and fill out consumer questionnaires.  Filling just one out can make your voice heard and hopefully bring GF products to Starbucks across the country.
Find your nearest Starbucks.
Posted by Stephen at 6:53 PM

- Hppt://Weargood.com shoes trade CO.,ltd.is located in industrial zone of Putian City,Fujian Province.As a professional shoe trade company.We will supply Nike shoe,Adidas ,Puma etc. Our products have been exported kinds of shoes all over the world,such as European countries,Northern America,the Middle East ,and so on.To expand our market and meet much more customers' demand, we will give you high quality but reasonable price.